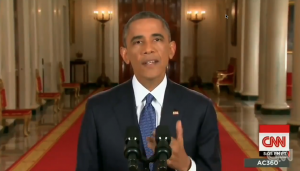 Former President Barack Obama recently stated that President Joe Biden is “finishing the job” that was started by his administration before Donald Trump was commander-in-chief.

Obama spoke with the New York Times, noting that his former vice president was taking the goals that he laid out during his time in the White House and completing them, stating that 90 percent of his former staffers are continuing and building on the policies we talked about, whether it’s the Affordable Care Act or our climate change agenda and the Paris [climate deal].”

“I think that what we’re seeing now is Joe and the administration are essentially finishing the job,” Obama said.

Obama also reflected on former President Donald Trump‘s 2016 victory, suggesting that the election win and rebound economy that sparked during Trump’s four years in office may have marred what “would have been a more impactful shift in political views towards Democrats.”

“The fact that Trump interrupts essentially the continuation of our policies but still benefits from the economic stability and growth that we had initiated means people aren’t sure,” he went on to say.

“Let’s say a Democrat, a Joe Biden or Hillary Clinton, had immediately succeeded me, and the economy suddenly has 3% unemployment. I think we would have consolidated the sense that ‘oh, actually, these policies that Obama put in place worked,’” the former president added.

From the start of the 2008 financial crisis to 2016, unemployment in the United States remained above 4.5%. In 2018, during the height of Trump’s term in office, unemployment fell below 4% for the first time since 2007, marking one of the key high points for his legacy.

“It’s hard to just underscore how much the bank bailouts just angered everyone, including me,” Obama said about the remedy for the 2008 financial crisis that he helped support when he opted to pass the Troubled Asset Relief Program in February 2009.

Obama then went on to state that he hopes the Biden administration will help shift the next generation of American voters more toward the left when it comes to policy. He said that he believes the administration’s goals, like fighting climate change and creating jobs, will help create successful policy agenda that “people will notice,” stating “it will have a political impact.”

There was no reply when the Washington Examiner reached out to the White House for a comment on the former president’s comments.