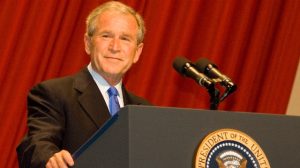 Former President George W. Bush tore into the Biden administration and their decision to pull troops out of the country of Afghanistan, stating that locals will end up being put in danger as a result.

The United States military had completed 90 percent of its duties that are related to troop withdrawal, it revealed on July 6. Gen. Austin Scott Miller, who is the top general in Afghanistan officially left his post on Monday, and Gen. Kenneth McKenzie stepped up to take his place.

“I’m afraid Afghan women and girls are going to suffer unspeakable harm” after the troops finish departing from  Afghanistan on the final day of August, Bush stated Wednesday on DW News. “It’s unbelievable how that society changed from the brutality of the Taliban.”

The U.S. withdrawal is a mistake, and “the consequences are going to be unbelievably bad,” Bush said.

Biden, in his announcement about the moved up date of the troops’ withdrawal, pushed back on claims such as Bush’s, explaining that the U.S. has given Afghans “all the tools” they need to fend off the Taliban, though some allies and partners have expressed doubts.

United States forces left Bagram Air Base in the early part of July, which was once the headquarters for the operation in Afghanistan. Around 650 troops will stay behind to help secure the U.S. Embassy in Kabul.