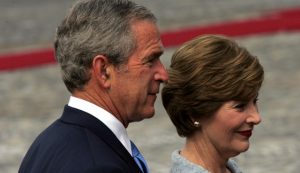 Former President George W. Bush, along with his wife, broke his silence concerning the fall of Afghanistan at the hands of the Taliban, a situation that led to the frantic evacuation of U.S. citizens and Afghan allies that is being compared to the fall of Saigon, which took place back in 1975.

Just a few hours after President Joe Biden addressed the country concerning the situation in Afghanistan, the former president put out a statement through his presidential center.

“Laura and I have been watching the tragic events unfolding in Afghanistan with deep sadness,” Bush and his wife Laura, went on to say in a joint statement. “Our hearts are heavy for both the Afghan people who have suffered so much and for the Americans and NATO allies who have sacrificed so much.”

Bush, the 43rd president from 2001 to 2009, made only one mention of Biden and did not discuss former President Donald Trump, who set the pullout in motion last year, albeit with a plan of his own .

“The Afghans now at the greatest risk are the same ones who have been on the forefront of progress inside their nation. President Biden has promised to evacuate these Afghans, along with American citizens and our allies. The United States government has the legal authority to cut the red tape for refugees during urgent humanitarian crises. And we have the responsibility and the resources to secure safe passage for them now, without bureaucratic delay. Our most stalwart allies, along with private NGOs, are ready to help,” the Bush family said.

Evacuations are underway at the airport in Kabul, where Biden sent back thousands of U.S. troops to assist with the process and protect the area as the Taliban entered the capital. The situation has been tense, with Afghans storming the tarmac and some people dying in the chaos, but the Pentagon denied on Monday that the evacuation operation had been a “failure,” as some have asserted.

“Laura and I are confident that the evacuation efforts will be effective because they are being carried out by the remarkable men and women of the United States Armed Forces, diplomatic corps, and intelligence community. And we want to speak to them directly, along with the veterans who have served in Afghanistan,” the Bushes continued.

“Many of you deal with wounds of war, both visible and invisible. And some of your brothers and sisters in arms made the ultimate sacrifice in the war on terror. Each day, we have been humbled by your commitment and your courage. You took out a brutal enemy and denied Al Qaeda a safe haven while building schools, sending supplies, and providing medical care. You kept America safe from further terror attacks, provided two decades of security and opportunity for millions, and made America proud. We thank you from the bottom of our hearts and will always honor your contributions,” the statement read.

Earlier, Karl Rove, who served as senior adviser and deputy chief of staff in the Bush White House, said his former boss was “undoubtedly upset” about the situation in Afghanistan, where government forces largely refused to put up a fight against the advancing Taliban. He also said the Taliban were ready to reinstate its “brutal regime” after two decades.

“For 20 years, Laura Bush has hosted groups of Afghan women who came into the United States after beginning to taste freedom in their own country in order to learn about the opportunities that were available to women all around the world. And the idea that the Taliban is going to somehow allow that to continue is absolutely ridiculous,” Rove said during a chat with Fox News.

“In times like these, it can be hard to remain optimistic,” the Bushes added. “Laura and I will steadfastly remain so. Like our country, Afghanistan is also made up of resilient, vibrant people. Nearly 65 percent of the population is under twenty-five years old. The choices they will make for opportunity, education, and liberty will also determine Afghanistan’s future. As Dr. Sakena Yacoobi of the Afghan Institute of Learning, which has opened schools for girls and women around the nation, wrote this week: ‘While we are afraid, we are not defeated.’ She added, ‘Ideas do not disappear so easily. One cannot kill whispers on the wind. The Taliban cannot crush a dream. We will prevail, even if it takes longer than we wanted it to.'”

“Laura and I, along with the team at the Bush Center, stand ready as Americans to lend our support and assistance in this time of need. Let us all resolve to be united in saving lives and praying for the people of Afghanistan,” the Bushes said in conclusion.

This is all the fault of Biden and his weak leadership, especially in the foreign policy department. The right thing to do would be to take responsibility for this mess and admit that the course of action he took was wrong.

That will never happen.