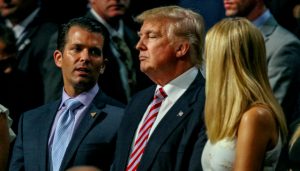 The court filings request the three Trumps testify concerning a civil investigation that is looking into family’s business practices, specifically concerning testimonies and documents that are “in connection with an investigation into the valuation of properties owned or controlled by Trump and his company, the Trump Organization.”

The filing was officially issued on Thursday, but it wasn’t made public until Monday.

The subpoena comes two weeks after Trump filed a lawsuit on Dec. 20, 2021, to stop James from investigating his businesses. The former president’s lawsuit claimed James’s mission is “guided solely by political animus and a desire to harass, intimidate, and retaliate against a private citizen who she views as a political opponent.”

James, known for overseeing the report that precipitated the resignation of former New York Gov. Andrew Cuomo, suspended her gubernatorial bid for the New York governorship on Dec. 9. She will instead seek reelection for her current position.

As of this writing, neither Trump’s offices, nor those belonging to James have responded to WE’s request for a comment.