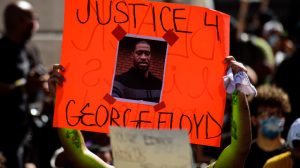 The judge who is overseeing the case against four former Minneapolis police officers announced on Thursday that the third-degree murder charge against lead officer Derek Chauvin would be dropped.

Now, Chauvin will faces charges of second-degree murder and second-degree manslaughter. Both of these charges carry much more severe penalties than the third-degree charge would’ve.

KARE Minneapolis reports that all four defendants in the Floyd case — Chauvin, Tou Thao, Thomas Lane, and J. Alexander Kueng — petitioned for the judge to dismiss their charges, but the judge in the matter ruled against all but one of the petitions — the petition to drop the third-degree murder charge leveled against Chauvin. The other three officers are still charged with “aiding and abetting” a second-degree murder.

Thursday morning’s decision is expected to be the first in a flurry of decisions outlining how Chauvin’s and the other officers’ trials will proceed. All four officers moved not just to have their charges dropped but for a change of venue, arguing that, because of the national attention associated with the Floyd case, they cannot get a fair trial in Minneapolis.

KARE explained the judge’s decision as being in line with what defendants in Minnesota might expect.

“According to Minnesota law, murder in the third degree is committed when there isn’t intent or premeditation. A typical use of the third-degree murder charge would be used against a person who fired a gun in to a crowd or drove through a crowded sidewalk,” the outlet continued on, comparing the charge to criminal recklessness.

“The language of the third-degree murder statute explicitly requires the act causing the ‘death of another’ must be eminently dangerous ‘to others,’” Judge Peter Cahill said as he explained his ruling to the court.

“Cahill ruled that while third-degree murder is applicable in cases when a defendant’s actions could have harmed others, prosecutors are accusing Chauvin in the death of just one victim, Floyd,” NBC News added in their coverage of the decision.

This isn’t really anything that should make the Black Lives Matter crowd angry, but then again, who knows? It seems they are constantly looking for some sort of justification to get wild and cause chaos. Guess we’ll find out later tonight if this is something that’s going to please them or send them off the deep end.