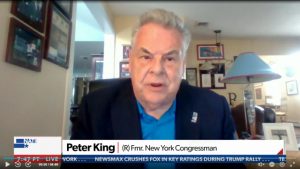 During a recent conversation former New York Rep. Pete King had with Newsmax, he went on to mourn the fact that modern America is discussing defunding the police, going on to warn that taking such action could end up setting us back and also leaving us vulnerable to another terrorist attack like our nation experienced back on 9/11.

“I don’t want to be victims of our own success – because of tremendous effort, we have not had a major attack in 20 years – that could change overnight, if we ever let our guard down,” King went on to say during his chat with host Shaun Kraisman in a live interview broadcast from the 9/11 service as names of those who lost their lives that fateful day were being read.

“So people who want to defund the police, who want to cut back on the military, cut back our intelligence agencies: We do that, we’re inviting another 9/11,” he continued.

King gave praise to “real Americans” who have demonstrated support for police and the 9/11 first responders.

“To me, this was the heart of American people. The people here today were people who love their country, love the police, love the firefighters, love the armed forces – and it was really great to be with them,” he then added.

King said every year 9/11 warrants our undivided attention, hailing the rebuilding, unity, and love as the embodiment of “the American spirit, the dynamism of America.”

“I was actually working right up the block when they were building the World Trade Center,” King proclaimed. “I remember coming back on 9/11, I couldn’t tell where I was, even though it’s only a block from where I worked.

“But to see this, it’s coming back to me: This is America. We fought back. I don’t think even the most patriotic, dedicated person would have thought on Sept. 12, 2001 this would be what it is today. This is, to me, the American spirit, the dynamism of America, not giving up, not feeling sorry for ourselves, and not also always criticizing America and saying we’re systemically racist,” he concluded.

King’s right. The last thing we need is to make our national security even weaker by reducing the funding for police and by extension reducing their presence on the street.

This will be harmful for folks in rougher areas of big cities, as well as putting the country in a spot to be attacked by those who despise our way of life.