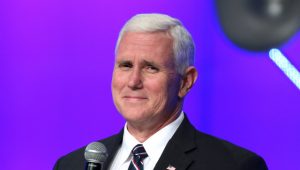 After the arrival of the three American prisoners from North Korea back in the U.S., both the president and vice president greeted them at Andrews Air Force Base, where something really cool happened.

Pence shared a super emotional moment between one of the detainees and himself, where a note was passed containing a Bible verse on it.

Pence himself is very religious and dedicated to his faith and principles taught in Scripture, so this gesture was especially meaningful for him.

It was an amazing moment I’ll never forget… when 3 Americans stepped onto the tarmac at @JBA_NAFW & gave me a signed personal note with Psalm 126 on the back. “When the Lord brought back the captives to Zion…” To these men of faith & courage – God bless you & welcome home! pic.twitter.com/vQhdllUADy

It’s not clear at this point which of the three wrote the note, but one of them is a pastor and the other a missionary.

The three men who were released were Kim Hak Soon, Kim Dong Chul, and Kim Sang Duk. Hak-Soon and Sang Duk, who taught at the Pyongyang University of Science & Technology (PUST), were detained in Apr & May 2017; Kim Dong Chul was arrested in October 2015.

Kim Hak-song was ordained as an evangelical Christian pastor affiliated with the Oriental Mission Church in Los Angeles. His wife told CNN that he is an agricultural expert who’d been teaching rice-growing at the university.

Kim Dong Chul has said he is a Christian missionary. In January 2016, a North Korean defector, Ma Young-ae, told Reuters on Tuesday that she had met Kim in the United States. She stated, “He told the churches that he was a missionary working on North Korea and sending stuff from China into the North to help poor North Koreans.”

If someone else had been sitting in the Oval Office, this situation might have had a vastly different, likely more tragic outcome, but thankfully God’s in charge and know’s what He’s doing.

We should all be grateful for the effort the president put into getting these men freed, doing what no other leader would have or likely could have done.

It’s nice to have a “w” in the win column for once when it comes to dealing with North Korea.