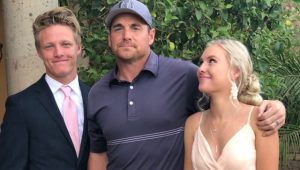 Former National Football League kicker Jay Feely is finding himself the object of scorn from angry, anti-gun leftists after taking a prom photo of himself with his daughter, her date, and a gun.

Yes, apparently having a sense of humor and playing off old cliches is a no go in our hypersensitive culture and is offensive to our namby pamby sensibilities.

Just how “triggered” — wow, what a delightful play on words — is the left? USA Today, the Washington Post, and Deadspin all decided to cover it making it national news, despite the fact tons of these kind of pictures get taken every year around this time.

Wishing my beautiful daughter and her date a great time at prom #BadBoys pic.twitter.com/T5JRZQYq9e

And now, here’s a small sample of the insanity this innocent photo inspired. Please enjoy:

Wishing my beautiful daughter and her date a great time at prom #BadBoys pic.twitter.com/T5JRZQYq9e

He is also apparently sending a message that he owns his daughter, and this kid better not trespass on his "property".

Do you think that a decades-old joke about guns maybe aged very badly in the face of decades of avoidable gun slaughter?

Feely weighed in on the photo later on:

The prom picture I posted was obviously intended to be a joke. My Daughter has dated her boyfriend for over a year and they knew I was joking.
I take gun safety seriously (the gun was not loaded and had no clip in) and I did not intend to be insensitive to that important issue

Anyone else sick and tired of feeling like they have to walk on egg shells in order to prevent someone else from being “offended?”

What, exactly, is wrong with being offended? Some folks act like being offended is the worst thing in the world that can happen to you. Being offended doesn’t make you ill or put you in an early grave.

Someone says something you don’t like, who cares? Ignore that person and move on. Why allow that person to have so much power and control over you, to dictate your emotional state?