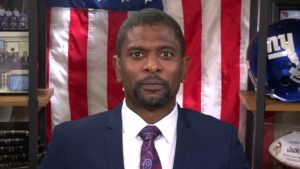 Former NFL safety Jack Brewer recently stated that the way to change the anti-police sentiment and the increasing racial divide in America is by putting God and discipline back in classrooms.

“We gotta get God back in our schools. I’m a believer in that,” Brewer said in an interview with the Daily Wire. “And most importantly, we gotta get discipline back in our schools because when you’re raised in discipline, then you demand discipline from other people as well. And right now, we’ve gotten so free. When they pulled the paddles out of the schools in the mid-80s, that’s where this all started. I say it all the time: Some kids need the paddle. They need that — that fear of authority being able to tell them what’s right or wrong. That’s why you see people disrespecting cops like they do now.”

Brewer has a charity organization called The Jack Brewer Foundation which helps fight poverty all across the world. He’s also working toward launching a faith-based education program called the Serving Institute sometime this month.

“If you do anything that’s disrespectful, speak disrespectfully, if you don’t show the highest level of discipline, I will physically exert you as your punishment so that you understand that you have to be held accountable. We need the fear of God back in our schools, and we need our parents to start being parents again and not friends,” he said, speaking of his new program.

Brewer said he was inspired to help build a positive relationship between the police and the community in 2016, after former NFL quarterback Colin Kaepernick began protesting the national anthem.

“Back in 2016, when Kaepernick started kneeling, I said there is something we gotta do to bring law enforcement and community and sports to be that vehicle,” Brewer said. “And so we started that program and partnered with a number of police athletic leagues around the country to kind of bridge that gap. And I served for a couple of years as the spokesman for the Police Athletic League.”

“And as that grew and things didn’t necessarily get better around us with these relations, I just wanted to do more,” Brewer continued. “I started to do a lot of teaching, and we started programs in partnership with the Fordham Gabelli School of Business and now with Liberty University. I started teaching professional athletes, and I started teaching in the prisons. And I just noticed that one thing that was keeping us divided was that access to education.”

Brewer has been an outspoken supporter for former President Donald Trump and has defended him against the left’s ridiculous charges of racism in a speech that was delivered at the Republican National Convention held last August.