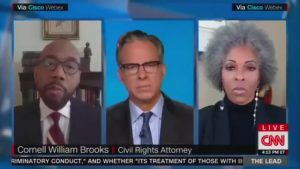 Civil rights attorney and former NAACP Chairman Cornell Brooks is either completely stupid, just plain ignorant, or both, because he actually took an opportunity to weigh in on the Columbus knife-wielding incident, which led to the police shooting of 16-year-old Ma’Khia Bryant, to a “schoolyard fight.”

Civil rights lawyer Cornell Brooks says the officer "within minutes" shot Ma'Khia Bryant and said she was just in a "schoolyard fight."

He doesn't mention the knife seen in bodycam footage. pic.twitter.com/VsoGEJf0Hg

Body camera footage from the incident appears to show Byrant wielding a knife while she charges a woman and pins her to a car, prompting the responding officer to open fire on Bryant, killing her.

In the immediate aftermath, Brooks posted a series of Tweets questioning the officer’s decision to shoot Bryant.

“As we waited for the #DerekChauvin verdict, 15 yr old #MakiaBryant was killed by police—AFTER she called them to break up a fight, according to family,” Brooks wrote in one post.

“White mass shooters are arrested without scratch— but we’re wrong to ask ‘why is a Black child with a knife dead?’” he said in another, comparing her killing to Dylann Roof, who was sentenced to death after killing nine people in a black South Carolina church in 2015.

Brooks went on to try and defend his earlier assessment of the tragic situation in another tweet, questioning why he should “apologize” for supposedly seeking the facts.

Why apologize for describing a fight among children, as a “school yard-fight?”

Why apologize for at least asking why ANY child had to die?

Why apologize for demanding facts in context—instead of immediately blaming a child for her own death? #makhiabryant https://t.co/iViXMoPFvS

Well, it should be clear by now this man does not have a moral bone in his body. What a truly deplorable human being. A schoolyard fight is usually a petty affair because someone told a bad joke about someone’s mother, or a bully wants to take someone’s lunch money.