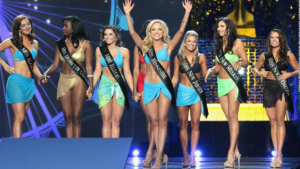 As you may have heard, the Miss America beauty pageant is, well, no longer including beauty as a part of their competition.

Which sort of contradicts the point of a beauty pageant.

The announcement was made on ABC’s “Good Morning America”  this week by Gretchen Carlson, chairwoman of the board of trustees of the Miss America Organization, The Blaze reports:

Instead of running the swimsuit segment in the pageant and broadcast, the competition will feature “a live interactive session with the judges.”

The contestants will be “asked to demonstrate their passion, intelligence and overall understanding of the job of Miss America.”

The organization has also replaced the evening gown portion. Miss America contestants will be permitted to wear clothing that makes them feel “confident, expresses their personal style and shows how they hope to advance the role of Miss America.”

“We’ve heard from a lot of young women who say, ‘We’d love to be a part of your program but we don’t want to be out there in high heels and a swimsuit,’ so guess what, you don’t have to do that anymore,” Carlson said. “Who doesn’t want to be empowered, learn leadership skills and pay for college and be able to show the world who you are as a person from the inside of your soul.”

Carlson added that the competition changes aim to create a more “inclusive” and “transparent” environment and hopefully appeal to a younger audience.

“We are now open, inclusive and transparent and I want to inspire thousands of young people across this country to come and be a part of our program,” she told “GMA.”

I think we can all agree it goes without saying that men are probably allowed to compete as well but she did not mention that.

Well, a former Miss Ohio joined Laura Ingraham this week to blast the changes, which she believes will do nothing to help the #MeToo movement or whatever it is that the contest is trying to accomplish by eliminating its key events.

Speaking to Laura Ingraham on Tuesday’s “The Ingraham Angle,” Gesiotto decried the organization’s decisions as “ridiculous” and said that the move away from a looks-weighted competition will not make a positive impact on the #MeToo movement.

“Of course, outward beauty is not as important as inner beauty, but at the same time it doesn’t mean that outer beauty can’t exist,” she explained.

The former beauty pageant contestant told Ingraham that she simply “can’t keep up” with the #MeToo movement.

She added, “It’s ridiculous. They’re totally off-base, they make no sense and I don’t think they’re really making [a] positive impact on the ‘MeToo’ movement with this ridiculousness.”

She’s right. No one has ever understood Miss America to be anything but a beauty pageant. We’re bordering into Sharia territory by eliminating one of the cornerstones of the pageant. If they want to have a Miss America personality pageant, they might as well create a new pageant all together instead of eroding the foundation of a time-honored and celebrated American tradition.

Perhaps some, even many, pageant entrants love this new policy, but what about all the women who have worked hard to be bathing suit- and evening gown-ready for the event? Who want to be judged on their beauty? Or the women who enjoy watching Miss America precisely for the beauty aspect?

Remember, it’s not just men who like to look at beautiful women. Fashion magazines, packed to the brim with scantily-clad, gorgeously coifed women are appealing to other women.

At the end of the day, removing these aspects of the pageant actually, in a way, undermines the very idea of women’s equality. After all, shouldn’t the professional and academic worlds be the place where women are judged for their intellect? Aren’t women equal to men in these areas of society?

Not to mention, is anyone discussing turning Mr. America, the body-building competition, into an “inner beauty” pageant?

No, they’re not, because it doesn’t make any sense at all to turn a pageant that has always been about physical looks into anything else for the sake of some kind of misguided politically correct publicity stunt to pander to and patronize empowered, confident American women who didn’t need anyone’s help showing their inner beauty.