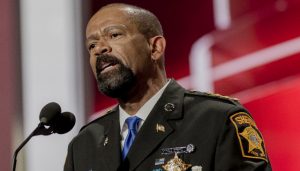 Former Milwaukee County Sheriff and diehard conservative patriot, David Clarke, told Newsmax on Friday that he had to “hold back tears” while watching the extremely emotional responses of Kyle Rittenhouse during the announcement of the not guilty verdict concerning charges filed in connection with the shooting deaths of two protesters and the injuring of a third during the infamous Black Lives Matter riots in 2020.

“I’ve talked to this young man,” Clarke stated during an interview on Newsmax’s “American Agenda.” “He’s been under a lot. Think of this, 17 or 18 years old; all over the world, they were watching this case. He became a household name, for heaven’s sake.”

Now that the 18-year-old has been acquitted, the former sheriff hopes that he’ll be allowed to go with his family and “live somewhat of a normal life,” despite the fact that will be very difficult.

And now that Rittenhouse has been acquitted, Clarke said he hopes he’ll be allowed to go with his family and “live somewhat of a normal life,” even though that will be “very difficult.”

Meanwhile, Clarke said he is concerned that the National Guard wasn’t ready and stationed for when the jury’s verdict was announced, considering the high-profile case and the number of protesters who have gathered outside the Kenosha courthouse all week.

“If I would have been in charge of the security of that operation, I would have already had them deployed in certain key strategic areas around that courthouse ahead of time,” Clarke remarked.

He said he understands that the National Guard, which has been deployed, is still a few counties away and he’s surprised that the verdict came out with so little notice.

“They are two counties away,” he went on to say. “That’s irresponsible.”

Clarke then went on to say that he doesn’t believe there will be any “huge” incidents following the verdict.

“At the same time, you know the persecution of Kyle Rittenhouse is over, and I said persecution, not prosecution,” said the former sheriff. “This was a politically motivated witch hunt, if you will, to get this young man. It was obvious self-defense. I’m hoping this is a pivotal moment in our system of justice.”