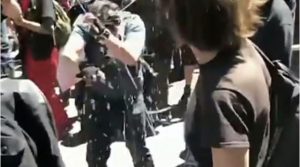 A former member of radical left-wing group Antifa, Gabriel Nadales, recently spoke with Fox News where he slammed what he called a “violent left gang of anarchists and socialists” in the wake of the brutal beatdown of journalist Andy Ngo.

It’s nice to see a young man thinking for himself and coming out against this group of thugs and miscreants for their physically violent behavior.

Nadales told Fox News that while he didn’t end up hurting anyone during his stint with Antifa, at the time he considered himself an anarchist and said he participated in “a lot of vandalism.”

As for the group’s penchant for physical violence, Nadales added to the network that it’s the only card they can play since they have “no way of arguing” with others.

He also decried the group’s “mob mentality” and said that was likely behind the attack on Ngo.

“I’m willing to bet that a lot of the people who attacked Andy didn’t even know who he was” Nadales told Fox News. “They just saw one of their members attack, and then they just piled on and started attacking him” as well.

Nadales, who is now a campus speaker for the Leadership Institute, said that what changed his mind about the group was when it began to dawn on him that Antifa was not interested in dialogue or discussion. Their prime objective isn’t to win hearts and minds to what they believe to be true.

He told Fox News that when he raised objections to their behavior he was told to “shut up or get out.”

His experience in dealing with conservatives was vastly different. Nadales said those he interacted with were very understanding and always willing to engage in conversation, which the left lacks sorely.

This is something a lot of folks have begun to notice the more video footage is captured of the heathens in Antifa acting like angry apes. This is not a movement that wants to change the world. They want to destroy it.

It seems these folks are super angry about a variety of different things and are using Antifa and political activism as a means of expressing the deep rage seated in their hearts rather than seeking real help.

It’s sad, terrifying, and enraging all at the same time.