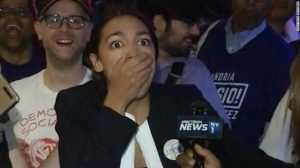 Rep. Alexandria Ocasio-Cortez seems to be nothing more than a meme machine, pumping out ridiculously dumb statements and gaffes with a speed and regularity that just simply boggles the mind.

Some of her statements are so far off the reservation, one has to wonder how in the world she’s managed to get elected to Congress. Well, then again, looking at the lack of quality individuals serving our nation at the federal level, maybe it’s not so surprising after all.

She added: “The one thing the president has not talked about is the fact he has systematically engaged in the violation of human rights on our border.”

On Wednesday, former acting ICE director Thomas Homan ripped the 29-year-old former bartender who was sworn into Congress last week, calling her an “embarrassment” to her alma mater Boston University.

“It’s incredible. Every time she opens her mouth she’s wrong. She supposedly went to college in Boston, she must be an embarrassment to that institution,” he said. “She needs to do her homework. First of all, no child died in ICE custody. That was a different agency, that was the Border Patrol. And they did everything they could to save that child’s life,” he said. “That child [was] in bad shape.”

“You want to blame somebody for deaths in custody? Then blame the Democrats [who] refuse to close the loopholes that use these families to come in the first place,” Homan said.

“When you talk about human rights violations, does she realize that ICE has arrested and removed hundreds of human rights violators from this country, including Nazis and people that committed war crimes in certain parts of Europe?”

One thing’s for sure. Ocasio-Cortez isn’t the sharpest tool in the shed, a fact that is clearly evidenced by her absolutely clueless answers and lack of substance when being pressed to articulate her own thoughts on important issues of the day.

She mostly spouts talking points, but when pressed to go deeper, comes up desperately short. It’s embarrassing and cringe-worthy to say the least.

However, the memes that are coming out about her are pure gold, so yeah, keep it coming!