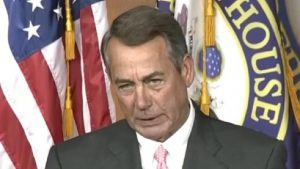 Former Republican Speaker of the House John Boehner was first put into this particularly high ranking position due to the 2010 Tea Party wave, after 20 years of representing the suburbs of Cincinnati.

Five years later, Boehner resigned due to growing discontent from members of his own party. And now he’s coming back into the spotlight to settle some scores with his foes in a brand new memoir.

Boehner, in an excerpt from his forthcoming memoir, On the House, lays into the Tea Party insurgents. In 2010, two years into Barack Obama’s presidency, the anti-government stalwarts helped Republicans win 63 House seats and reclaim the majority the GOP lost in 2006.

“You could be a total moron and get elected just by having an R next to your name,” Boehner writes. Though known as a Republican partisan since his early House days and rise in the GOP leadership, Boehner trains most of his rhetorical fire on fellow conservatives, such as Texas Sen. Ted Cruz, former Minnesota Rep. Michele Bachmann, and Fox News host Sean Hannity, among others.

“These guys wanted 100 percent every time,” Boehner writes, deriding the grassroots movement for not seeking “legislative victories.” He readily admits to his own reputation within the movement: “a sellout, a dupe of the Democrats, and a traitor.” Boehner chalks it up to conservative media “brainwashing” his colleagues.

“Of course the truly nutty business about his birth certificate,” Boehner said in the book. “People really had been brainwashed into believing Barack Obama was some Manchurian candidate planning to betray America.”

Boehner then went on to take shots at conservative pundits Mark Levin, Sean Hannity, and radio legend Rush Limbaugh. He also said that his “longtime friend” Roger Ailes led Fox News into “looneyville” and was paranoid about various conspiracy theories.

“He told me he had a ‘safe room’ built so he couldn’t be spied on,” Boehner said, speaking of Ailes’s obsession with former President Barack Obama and his administration. “His mansion was being protected by combat-ready security personnel, he said. There was a lot of conspiratorial talk. It was like he’d been reading whacked-out spy novels all weekend.”

He called Hannity a “nut,” and said that Sen. Ted Cruz is a “lunatic.”

“There is nothing more dangerous than a reckless asshole who thinks he is smarter than everyone else,” the former speaker writes about the Cruz who, in 2013, went to war with a futile Senate filibuster to block funding for Obamacare. “Ladies and gentlemen, meet Senator Ted Cruz.”

Wow. This guy is some piece of work, isn’t he? He compromised conservative values every chance he got while he was in office, and if that wasn’t bad enough, he was always boohooing (literally) and drinking.

Boehner was a joke. Still is a joke. And probably always will be a joke. Though, to be honest, he’d still be better than Nancy Pelosi, but hey, a leather shoe would be better than Pelosi so that’s not saying much.