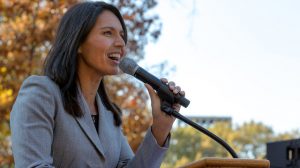 Former Rep. Tulsi Gabbard, a Democrat from Hawaii, recently put out a response to fellow Democrat, Rep. Cori Bush’s attack on Sen. Joe Manchin, a Democrat from West Virginia, explaining that the attack was deeply rooted in a “lack of a spiritual foundation.”

Gabbard made an appearance on Fox News where host Steve Hilton asked her to reply to Bush calling Manchin’s opposition the Build Back Better Act from President Joe Biden, calling it “anti-black, anti-child, anti-woman, and anti-immigrant.”

“It really just shows again, that this is a symptom of a deeper, a lack of a spiritual foundation,” Gabbard said in her response, “where if you’re not able to see someone, regardless of party politics, regardless of your position, whether you agree or disagree, if you’re not able to see another person, as a child of God, as someone that you can respect at that fundamental level, as a fellow American, then this is where we see all of this darkness coming from.”

Gabbard is right on the money.

The vast majority of the far-left is devoid of any sort of objective standard of truth and morality, which can mostly be found in the Bible.

The Good Book was considered by America’s founders to contain the most solid, foundational principles of morality out of any text in the world. Many of our laws were inspired by the Word of God.

Our first president, George Washington, believed that the Bible was essential to being able to lead this country. In order to preserve our liberty, the people must be a moral people.

The far-left has abandoned the objective standards of truth found in the Ten Commandments, which are naturally written on the hearts of men, and it has led to the current condition of our country.