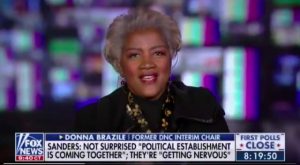 You know, it’s become something of a trend for folks on the liberal side of things to be a little unglued when they are dealing with folks who have a different view of the world than their own, a reality that has been put on display for us all on live television.

No, it’s not Antifa running amok again. It’s former DNC chairwoman Donna Brazile, you know, the person who leaked the town hall questions to Hillary Clinton’s campaign during the 2016 primary, who is caused the commotion this time.

Apparently, during a segment aired live on Fox News, Brazile told RNC chairwoman Ronna McDaniel to “go to hell,” not once, but twice, all for suggesting that the DNC is attempting to sabotage Sen. Bernie Sanders and rig the primary against him.

At the top of the segment, Brazile was asked to give her take on McDaniel saying that the Democrats may end up having a brokered convention, which will likely result in superdelegates voting against Bernie Sanders.

Brazile then proceeded to tell Donna to “go to hell” while accusing her and the Republicans of using “Russian talking points” to divide the Democrats.

“And for people to use Russian talking points to sew division among Americans that is stupid. So, Ronna, go to hell,” Brazile exclaimed, prompting some pushback from the hosts. “No, go to hell. I’m tired of it. We are not trying to prevent anyone from becoming the nominee. If you have the delegates and win, you will win. This notion that somehow Democrats are out there trying to put hurdles or roadblocks before one candidate. that stupid.”

The former chair of the DNC Donna Brazile just told @GOPChairwoman
to "Go to hell!"

THE LEFT IS COMPLETELY UNHINGED.

Yikes. Someone might want to consider switching to decaf, right?

So why is the GOP pushing this whole plot against Bernie thing? According to Brazile it’s because the Republican Party is terrified that Democrats might unite and defeat Trump in November. She then went on to repeatedly accuse the GOP of “foreign interference” by repeating what she called “Russian talking points.”

“I know what’s going on, they are scared of Democrats coming together to defeat Donald Trump,” Brazile said. “They need to be focusing on what we are focusing on in the Democratic Party, and that is preventing foreign interference in our election. Stop using Russian talking points, Madame chairwoman. Stop using it. It pisses me off.”

Brazile concluded by calling for Republicans to produce some proof to back up the claim that the Democratic Party is actively plotting against Sanders, proving how out of touch with reality this woman is.

You see, her activities in the 2016 presidential election, the whole slipping the town hall questions to Hillary in order to give her the edge over the competition — which included Bernie Sanders — in the primary is the evidence she’s seemingly looking for. Ironic, isn’t it?

The level of incompetence leaking from this woman is astounding. And these are the people liberals want running our nation’s health care system? Really?