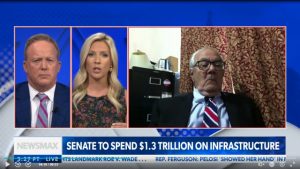 According to former Massachusetts Congressman Barney Frank, the move by Democrat House Speaker Nancy Pelosi to remove two members of the GOP from the Jan 6 select committee, while not technically violating any House rules, was a violation of “important norms.”

Frank, making an appearance on “Spicer & Co.,” told the hosts of the program that Republican then-Senate Majority Leader Mitch McConnell was guilty of the same sort of offense when he opted not to consider the nomination of Merrick Garland to the U.S. Supreme Court during Barack Obama’s last year in office.

Spicer told Frank the move by Pelosi could set a dangerous precedent in which Republicans could retaliate should they regain control of the House. Many speculate that just might happen in 2022.

“Unfortunately, I don’t worry about the precedent,” Frank went on to say, adding,”We had this outrageous precedent, in my judgment, one of the worst we’ve seen, of Mitch McConnell, refusing to confirm a Supreme Court justice with about a year left in the [Obama] presidency.”

When Spicer pointed out that McConnell had “played by the rules” in the Garland case, Frank agreed, but said that Pelosi did as well when she rejected Reps. Jim Jordan, R-Ohio, and Jim Banks, R-Ind. House Minority Leader Kevin McCarthy, R-Calif., had appointed them and three others to serve on the select committee.

McCarthy pulled the other three after Pelosi rejected Jordan and Banks.

Frank went on to state that he feels Jordan’s behavior in hearings has been “disruptive,” so he supports Pelosi in removing him from the committee.

In fact, Rep. Maxine Waters “was very publicly rebuking him because he just was violating the rules and talking when he shouldn’t have been talking,” Frank stated.