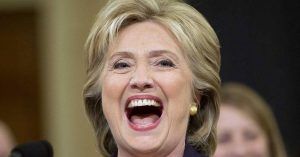 Longtime Clinton aide Philippe Reines recently told Politico he doesn’t understand why no one is talking about a Hillary 2020 campaign because, well, she’d obviously beat everyone, right?

“It’s curious why Hillary Clinton’s name isn’t in the mix — either conversationally or in formal polling — as a 2020 candidate,” he said.

Reines thinks she has great advantage over many of the other stronger candidates, like youth and experience and (snigger) popularity!

“She’s younger than Donald Trump by a year. She’s younger than Joe Biden by four years. Is it that she’s run before? This would be Bernie Sanders’ second time, and Biden’s third time. Is it lack of support? She had 65 million people vote for her.”

Wow, she’s younger than Trump by a whole year! We all know a 70-year-old white lady is just so much more relatable to the youths than a 71-year-old white dude. Youth. Vote. On. Lock.

Reines went on to say that while Clinton may not be able to get the 65 million votes she received in 2016, her base is likely much larger than that of Sanders or likely candidate Elizabeth Warren.

Which, to be fair, may actually be true.

But that’s not really saying much.

“There’s no one in the Democratic Party who has anywhere near a base of 32 million people. That’s multiples of what a Sanders or a Warren have.”

Reines said people just cut old Hill short because of her humiliating 2016 defeat. She’s got what it takes, he says.

“Chalking the loss up to her being a failed candidate is an oversimplification,” Reines said. “She is smarter than most, tougher than most, she could raise money easier than most, and it was an absolute fight to the death.”

There’s only one thing…Trump is far more popular now than he was in 2016. The “Never Trump” movement has virtually disappeared as conservatives who didn’t vote for him in 2016 say they’ll gladly vote for him now considering how much he’s managed to do so far in his first term.

“It’s somewhere between highly unlikely and zero,” he said, “but it’s not zero.”

That would have been fun. Cringe-worthy and pathetic, but at least a little fun.