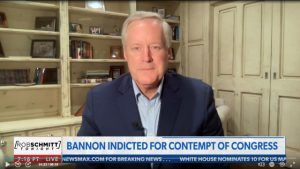 Former White House chief of staff Mark Meadows says the “hyper-partisan” Jan. 6 Select Committee isn’t at all concerned about uncovering what really happened that day, nor are they worried about the law or executive privilege.

According to him, all they want to do is keep a narrative going that will distract the American public from paying attention to the “failing” Biden administration and its total mishandling of multiple crises happening right now.

“We worked real hard to try to reach an accommodation with the committee, and yet it’s been basically their way or the highway,” Meadows said during an appearance on “Rob Schmitt Tonight” after he decided against appearing on subpoena sent by the committee early Friday.

“Congress has gotten so hyper-partisan and, candidly, this committee is more interested in politics than they are really solving real problems,” he continued to say during the interview.

The committee indicted former White House strategist Steve Bannon for contempt of Congress, the first time an indictment has been sought on that charge when executive privilege had been asserted by a U.S. president.

“They took a very aggressive move today and sadly, you know, I think what most Americans are seeing this is an attempt to really keep the focus on Jan. 6 and not on their failing Biden administration policy,” Meadows went on to say during his chat with host Rob Schmitt.

Meadows said he was not unwilling to share information with the committee, including information that counters the Democrats’ Jan. 6 narrative, but he said courts must first weigh in on Trump’s executive privilege.

“It would be irresponsible for Mr. Meadows to prematurely resolve that dispute by voluntarily waiving privileges that are at the heart of those legal issues,” his attorney George Terwilliger III explained in a written statement as former President Donald Trump continues to seek legal protection on his executive privileged communications.

“These are complex legal matters,” the former White House chief of staff then said to Schmitt. “Quite frankly, you’ve got a number of difference of opinions – kind of got me in the in the middle of it – where we’ve got a president in President Trump that is saying that he wants to claim executive privilege. There’s case law that would suggest that that’s appropriate.”

“You’ve got Congress that’s saying, ‘No, we’re not going to do that; we’re going to hold you in contempt if you don’t show up,” he said, adding, “Hopefully the courts will weigh in.”

The Democratic Party is using the same old moves from the same old playbook, one that was heavily utilized during the Trump administration, which is to create a narrative and then keep all eyes on it until the mainstream media runs with it and folks eat it up in the public.

“They have a they have a track record of doing that: You know what they’ll do is they’ll selectively leak,” Meadows then stated. “We saw that during the impeachment. We’ve seen that with the Steele dossier. They leak out little parts of it when they know they know better and, sadly, it hurts their reputation.”

The left will do anything to keep folks from examining the current track record of the Biden administration which is taking zero action to solve the supply chain crisis, the coronavirus pandemic, and the situation at the southern border.

This presidency is going to be one of the most unpopular in the history of this country. There’s no way Biden should be allowed to continue doing what he’s doing in office. Americans are suffering left and right, meanwhile, he does nothing. It’s not okay.