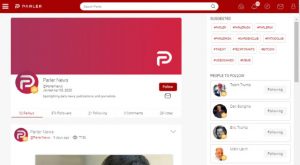 John Matze, former CEO of Parler, has now filed a lawsuit suing the company and its leadership for millions, claiming that his 40 percent stake in the social media company was taken from him and that he has been the subject of threats and bullying.

The lawsuit, which was filed in Nevada, claims that Matze’s 40 percent ownership in Parler was pulled from him for only $3 in compensation, which the suit goes on to call “outlandish and arrogant theft.”

The suit alleges that Matze is entitled to “punitive damages trebling (at a minimum) the millions that he is owed in compensatory damages.”

Matze’s suit particularly mentions his disagreements with billionaire Rebekah Mercer, a prominent conservative donor and founding investor of Parler, regarding content moderation. The suit claims his push for groups peddling conspiracy theories and violent content, such as QAnon and neo-Nazis, to be censored was resisted by Mercer and others on the leadership team.

Matze said this led to the site being “hijacked” by Mercer and others who disagreed with him in order to advance “personal political interests” and make the website a place for conservatives rather than the free expression platform Matze wanted it to be. Matze said in February that he’d been fired.

It’s very sad to see this company being destroyed by internal problems like this. You’d have thought all of the folks behind this project would have been on the same page about a lot of different things, but as it turns out, that’s not the case at all.

We’ll just have to wait and see how it all works out.