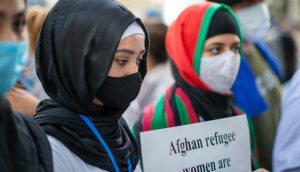 Former Acting Homeland Security Secretary Chad Wolf spoke with Newsmax saying that the current hurried processing of Afghan refugees will require many corners to be cut, which will ultimately lead to individuals with extensive criminal records to slip between the cracks.

“The vetting, the screening, usually takes months or even years to accomplish,” for Special Immigration Visa (SIV) applicants who have aided U.S. troops in Afghanistan, Wolf went on to say during a chat Tuesday on “Eric Bolling: The Balance.” The Biden administration has sped those up along with the screenings for other vulnerable Afghans, he pointed out.

“They can’t do that reliably in such a small time frame, so instead they’re paroling people in and doing some of those security checks on the back end, and that’s where I have concerns,” said Wolf, who served as the acting DHS Secretary during the Trump administration. “I think anytime you see this many or this number of individuals being processed so quickly, there are bound to be corners that are cut.”

Normally, it takes 18 to 24 months to properly process SIVs, Wolf stated, and even then, 80 percent of them are rejected, which means that the vast majority of folks currently being brought in will end up seeking asylum.

The former acting DHS secretary added that, “it only takes or two or three bad individuals” to get through the system to cause a problem. Afghanistan is home to the Taliban and to ISIS-K. Wolf warned that once an Afghan is on a U.S. military base, “legally, we can’t keep them there. They can walk off. And so that’s concerning me that there are some vulnerabilities in the system that the administration’s put together.”