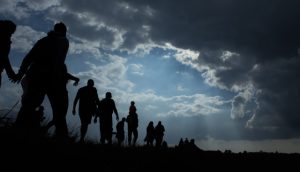 Erika Mouynes made the warning during an interview conducted with Axios on Wednesday, saying that a group of roughly 60,000 migrants, most of whom are from Haiti, are making their way toward the U.S. southern border, a surge that is four times as large as the number of migrants currently reported taking up residence under a bridge in Del Rio, Texas.

Mouynes expressed frustration with the U.S. government’s response to the Haitian migrant crisis at the border, explaining, “We sounded the alarm when we should have.”

“We’ve engaged with every single authority that we can think of, that we can come across, to say, ‘Please, let’s pay attention to this,'” she went on to say.

In the past month, Del Rio was overwhelmed with more than 15,000 Haitian migrants who had been living underneath an international bridge in a makeshift camp after crossing the Rio Grande, many of whom were seeking asylum.

The U.S. initially sent around 2,276 Haitians back to their home country. Homeland Security Secretary Alejandro Mayorkas later admitted that more than 12,000 migrants had been released into the U.S. after previously stating that the migrant camp had been cleared out.

The Panamanian government called on the U.S. to work with other countries in the region to address the situation, saying that they need to “recognize that they all are heading towards the U.S.”

Panama is currently expecting to see 27,000 migrants crossing the Darien Gap during the month of October, which is far more than back in 2019.

U.S. Customs and Border Protection professionals have encountered 208,887 people illegally crossing the border back in August. This is four times more than the 50,014 the people that were encountered at the same time last year.