For the Second Time in a Week, Google Search Results Reveal Anti-Republican Bias 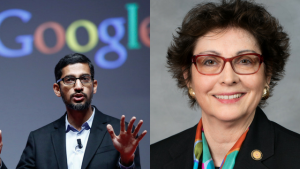 I’d like to take a moment at the top of this story to give some credit to a leftist publication.

Vice News is far from conservative, and yet they’ve been researching and have exposed now two incidents of disturbing bias in Google search results that shed an unfavorable and completely untrue bias on Republican politicians.

In this era of tribalism in the media, it’s important to give credit where credit is due, especially when a publication is willing to rise above picking sides and report on information bias from big tech that can negatively impact all Americans, not just conservatives.

Just last week, Vice exposed that the “knowledge panel” in Google search results for “California Republican Party” had listed “Nazi” first in a list of ideology held by the party. You can read more about that here. 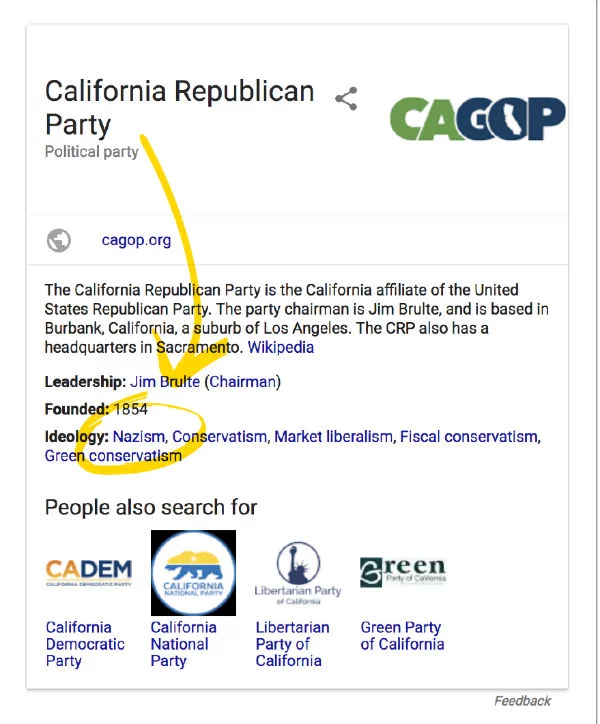 Now, Vice is reporting, Google has an image with the letters “BIGOT” superimposed on a picture of Senator Trudy Wade in the “knowledge panel” when you search her name.

It’s just the latest example of Google not vetting the information that gets pulled into its “knowledge panels,” which are meant to give users quick information without them having to click through search results (often on other, non-Google websites).

Wade declined to comment to VICE News, but a legislative aide reacted angrily to the search results, adding that “the picture isn’t even current.”

Google’s “Bigot” picture has surfaced as Wade is in the midst of a tough re-election battle against marketing executive and Democrat Michael Garrett. The state’s district maps were redrawn for this election after several courts ruled that the state had been racially gerrymandered to benefit Republicans.

The newly redrawn state legislative districts have made Wade and the 27th district a top target for progressives in the state. The local Indivisible group “Flip NC” has deemed the 27th one of its top 10 “most flippable” Senate districts this year as Democrats attempt to break the Republican supermajority in the state legislature that allows Republicans to override the Democratic governor’s vetoes. 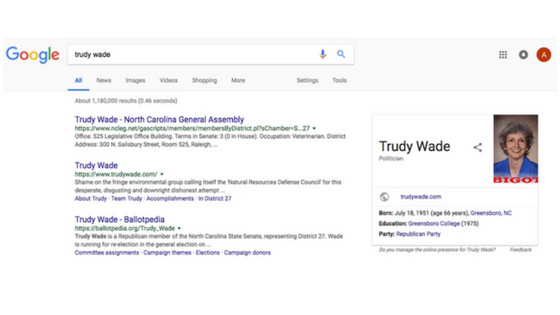 Google’s official response when caught, for the second time in the space of a week, with highly biased content in their “knowledge panel” section, is weak at best. They say: “Information and images from our Knowledge Panels are automatically sourced from around the web. When we are alerted to issues like this, we move quickly to fix the problem, as we did in this case.”

This is highly suspect to Vice, however, who says that “But Google’s reliance on third parties for facts is leaving it open to gamesmanship, particularly in an election year.”

“Wade’s photo doesn’t come from Wikipedia but rather from a February 2012 post from local progressive blogger and LGBT activist Matt Comer, who was upset with Wade’s support of a state constitutional amendment banning same-sex marriages and civil unions (which voters ultimately passed in May of 2012),” they say.

“Let me put this as plainly as I can: Mrs. Wade, you are a bigot,” wrote Comer in his post. “In what just world is it appropriate to support a constitutional measure that forever encases an entire minority of people in second-class citizenship?”

Vice explains that Comer was serving on the Greensboro City Council at the time and that, suspiciously, there is a more current photo of Wade on the North Caroline State Legislature website.