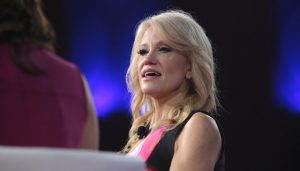 What exactly did she do that is getting her in hot water? She’s put Democratic presidential candidates on blast, a move which this act prohibits. Since these “accusations” have been made, folks have been calling for President Trump to boot her from the administration.

Trump, in an interview with “Fox & Friends” said that wasn’t going to happen.

“I’m not gonna fire her. I think she’s a terrific person. She’s a tremendous spokesperson,” Trump told the hosts, in comments reported by Fox News.com. Trump went on to criticize the Office of Special Counsel — an independent office tasked with government oversight (unrelated to the Robert Mueller investigation) — with “trying to take away her right of free speech” and suggesting that he wouldn’t ask her to dial back her rhetoric, saying he believes government employees should be allowed “to express themselves.”

On Thursday, the Office of Special Counsel Henry Kerner issued a letter recommending the dismissal of Conway, citing “numerous violations of the Hatch Act.”

“Attached to this letter is a copy of the U.S. Office of Special Counsel’s (OSC) investigative report detailing numerous violations of the Hatch Act by Counsellor to the President Kellyanne Conway,” the letter reads. “Ms. Conway’s disregard for the restrictions the Hatch Act places on executive branch employees is unacceptable. If Ms. Conway were any other federal employee, her multiple violations would almost certainly result in removal from her federal position by the Merit Systems Protection Board. As a highly visible member of the Administration, Ms. Conway’s violations, if left unpunished, would send a message to all federal employees that they need not abide by the Hatch Act’s restrictions. Her actions thus erode the principal foundation of our democratic system — the rule of law.”

In response, White House deputy press secretary Steven Groves argued that the Special Counsel “violate[d] her constitutional rights to free speech and due process,” CNN reports. “Others, of all political views, have objected to the (the office’s) unclear and unevenly applied rules which have a chilling effect on free speech for all federal employees. Its decisions seem to be influenced by media pressure and liberal organizations — and perhaps (the Office of the Special Counsel) should be mindful of its own mandate to act in a fair, impartial, non-political manner, and not misinterpret or weaponize the Hatch Act,” he said.

The left is really showing their hand here, making it known they are absolutely terrified of facing off against President Trump and pretty much know that doing so will equal a massive loss.

Especially with the pathetic crop of candidates they’ve managed to produce thus far.

If they do not somehow manage to shut Trump down before 2020, it seems they’re well aware they will be defeated. You’d think this would lead the Democratic Party to examine their current platform and see where it is out of touch with average Americans and adjust accordingly.

Nope. It seems they want to actually get more radical, despite the fact the vast majority of average Americans don’t want that.