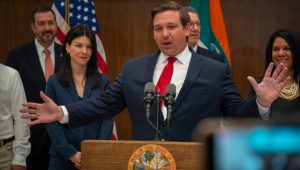 According to Florida State Rep. Blaise Ingolgia, if President Joe Biden really wants to lead the battle against the coronavirus, then he and his administration should not remove tools, like monoclonal antibodies, that are critical weapons in the fight against this illness, and Florida Gov. Ron DeSantis is right in demanding that the federal government stops getting in the way of those efforts.

“Gov. DeSantis was one of the first, if not the first in the nation, to start utilizing monoclonal antibodies to keep people out of hospitals and keep people from dying,” the Florida Republican said on Newsmax’s “National Report.” “Isn’t that what this is all about?”

Even Dr. Anthony Fauci, the president’s chief medical adviser, is admitting that the focus should be on hospitalizations and deaths, not the growing COVID case numbers, Ingoglia continued.

DeSantis told reporters Monday that the federal government has “cornered the entire market” of Regeneron and Eli Lilly monoclonal antibodies through the Biden administration’s order for states to obtain the medications through the Department of Health and Human Services.

Florida Surgeon General Dr. Joseph Ladapo wrote in a letter last week to HHS Secretary Xavier Becerra that “the federal government is actively preventing the effective distribution of monoclonal antibody treatments in the U.S. The sudden suspension of multiple monoclonal antibody therapy treatments from distribution to Florida removes a healthcare provider’s ability to decide the best treatment options for their patients in this state.”

“DeSantis has come under fire for his stance on keeping Florida more open than other states are, including on wearing masks. Ingoglia said that if people have problems with the policies they should stay away, not come there to vacation like Rep. Alexandria Ocasio-Cortez did last week because ‘freedom is a pretty powerful magnet,'” the report stated.

“We’re keeping people out of the hospital systems,” Ingoglia continued, going on to add that other states “still have not gotten it through their thick skulls” that measures such as mandates and lockdowns don’t work.

“Freedom works,” the state congressman said. “Give the people the tools to make their own decisions. It’s working in Florida … it has been nothing but it disaster in other states like New York and California. People are fleeing those states. They’re coming to the free state of Florida. Even AOC cannot turn away the prospect of freedom and no masks.”