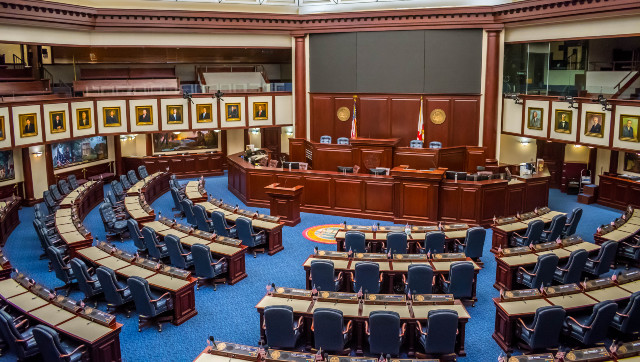 The Florida Senate has passed the “Parental Rights in Education” bill, which many of its critics in the state have labeled as the “Don’t Say Gay” legislation.

The vote was 22-17 with all of the Democrats in the Senate, along with two members of the GOP, voting against it.

The bill will now head over to Florida GOP Gov. Ron DeSantis’ desk where he is expected to sign it into law.

After nearly four hours of questions and debate on Monday night, Florida senators rejected all floor amendments to the parental rights legislation critics have labeled the “Don’t Say Gay” bill.

Near the end of a night filled with tears and anger — on the floor, in the Senate hallways and at school walkouts across the state — the Senate bill sponsor, Fla. Sen. Dennis Baxley, R-Ocala, said the bill addresses the recent “trending posture” of kids coming out at school.

“There’s something wrong with how we’re emphasizing this, and all of a sudden overnight, they’re a celebrity when they felt like they were nobody,” Baxley went on to say.

There were a total of 13 amendments filed ahead of the floor session on Monday. All of them were voted down.

“This is a blanket amendment,” Brandes stated. “It says ‘talk to your parents’ about all of these conversations between kindergarten and third grade. Do I want my 8-year-old being instructed on sexual activity? Nope, I don’t want that, and neither do you.”

“Ultimately what it does is it gets Senator Baxley the intent that he wants without this bill’s impact,” Brandes continued. “Because it applies equally to all of us, which is what I think we want.”

An amendment filed by Democratic Fla. Sen. Shevrin Jones of Miami Gardens, who is the first openly gay state senator, would have removed the age limit and banned any instruction “intended to change a student’s sexual orientation or gender identity.”

“I’ve been watching these children who are here,” Jones said as he started to tell a story about his dad that caused him to break into tears.

“I never knew that living my truth would cause church members to leave my dad’s church,” Jones went on to say in his story. “Or friends to stop talking to me. Or families to make jokes about who you are.”

“Other amendments would have defined the terms gender identity and sexual orientation, required schools to protect those categories in order to create a safe environment for students, and changed a separate statute on health education to teach the benefits of ‘monogamous’ marriage rather than ‘heterosexual,'” the report said.

“HB 1557, officially entitled Parental Rights in Education, specifies a number of procedures school districts and school personnel must follow in relation to parents, including notifying parents of changes to their child’s emotional or physical health or well-being, prohibiting schools from adopting procedures encouraging students to keep information from parents, allowing parents access to their child’s records, letting parents refuse consent for any health care services offered by the school, forcing schools to get parental permission for any health screening or wellness questionnaire, and specifying time limits by which schools must respond to parents and resolve their issues before parents can escalate or sue,” the report added.