Florida Man Asks Police to Test Quality of His Meth, You Can Guess What Happened Next 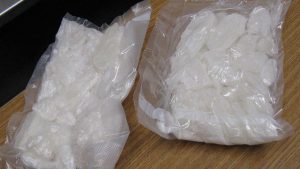 SAN LUIS, AZ – Two male individuals were arrested yesterday in separate incidents at the Port of San Luis for attempting to smuggle a combined $40,920 worth of methamphetamine into the United States. Photos by: U.S. Customs and Border Protection

If you ever needed to a good Public Service Announcement about not doing drugs, the following story should do the trick. If nothing else, it’ll tickle your funny bone, and in our day and age when laughter seems in short supply, who’s going to say no to that?

Douglas Kelly, a 49-year-old man from Florida, called the police and told them he had a bad reaction to some meth he purchased and smoked from a dealer.

He asked the Putnam County Sheriff’s office if they would test the drugs for him and make sure he hadn’t been sold some other narcotic than meth, stating he would press charges on the dealer if that was the case.

Yes, there really are people this dumb on the earth. Fear for the future, y’all.

According to the Putnam County Sheriff’s Facebook page, “Kelly drove to the sheriff’s office and handed detectives a clear, crystal-like substance wrapped in aluminum foil. The substance field-tested positive for methamphetamine, the drug Kelly intended to purchase.”

What happened next played out just about how most people would expect. Police arrested Kelly on possession of meth. They walked him to the Putnam County Jail, where he was held on $5,000 bond.

The sheriff’s office encouraged other drug users to follow Kelly’s example. The top of the post read: “PUBLIC NOTICE: If you believe you were sold bad drugs, we are offering a free service to test them for you.”

The post concluded: “Remember, our detectives are always ready to assist anyone who believes they were misled in their illegal drug purchase.”

You just know this guy is going to be featured on some reality special some day about dumb criminals. It has to happen. We must make it so.

Again, this is what happens to your brain when you end up putting poison into your body.