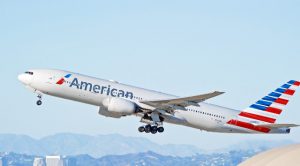 Over the weekend, American Airlines had to cancel a whopping 2,000 plus flights, with an additional 300 cancellations popping up on Monday, as the airline continues to suffer from staffing shortages. These cancellations led to thousands of customers being stranded at various airports all across the United States.

A new report from ABC News said that the airline attempted to pass the blame for these cancellations on to inclement weather such as high winds blowing through the Dallas-Fort Worth airport hub last Thursday, along with logistical issues due to flight crews reaching work limits, but hey, we all know the actual reason that’s probably behind these cancellations, right?

There’s no doubt American Airlines, along other major airlines, are suffering shortages because pilots and other members of the flight crew do not want to be forced to take the vaccine.

“The problem with most of the large airlines is if they if one hub sneezes, the other hubs catch colds,” aviation expert Henry Harteveldt stated during a chat with ABC. “The airlines’ networks are all interconnected.”

“Unfortunately, when bad weather hits an airline at the end of the month, the problems are exacerbated because often crews are out of the legal amount of time they’re allowed to work,” Harteveldt went on to say.

Yeah. Right. Or, maybe, just maybe, the airlines don’t want regular folk to be inspired by patriots standing up against medical tyranny? Just something to chew on.

In an internal memo to staff, American Airlines COO David Seymour said that the airline was forced to cancel some flights “for the last few days this month” in order to deal with the scheduling difficulties. The memo said that the company would be able to make it through “the brief irregular ops period quickly with the start of a new month.” The airline is expecting reinforcements to help ease the issues, as 1,800 flight attendants are set to return from leave, which ABC reported should help to re-stabilize the schedule.

The U.S. Freedom Flyers, an organization of airline and transportation workers working to oppose the vaccine mandates imposed by airlines and the federal government, disagreed with the airline’s public statements. In a press release to The Daily Wire, the organization blamed the staff shortages on stresses imposed on staff because of vaccine rules.

“The system is stressed as it is and now we have unions coming out and gaslighting their members that if they are unvaccinated, they need counseling and education,” said Freedom Flyers founding member Jason Kusinich, citing an email by the president of the American Airlines Pilots’ Union, which said unvaccinated crew members needed “education and counseling.”

“[I]t appears as though flight crews have reached their breaking point,” the memo said. “Flight crews are acknowledging that because their Unions and Companies have broken their social contract, they are in a place where it is not safe for them to fly. ‘The unions and companies haven’t shown up for employees and now those employees aren’t showing up for work.’”

“Delays and cancellations are continuing and appear to be spilling over into Monday, November 1 as well. Perhaps the sooner the unions and company leadership start showing up for their represented members and employees the sooner operations can get back to normal,” the memo continued.

This is the second time a major airline was forced to make mass cancellations in just a three week period. Southwest Airlines was forced to cancel 1,800 flights during the weekend of Oct. 9-10, with an additional 300 more and then 1,100 delays.

The FAA similarly stated that the problem was “severe weather” and flight crews “out of place.”

Many folks began to speculate that the mass cancellation was the result of a pilot strike, but Southwest put some serious distance between itself and that theory.