FLASHBACK: Socialist Ocasio-Cortez Felt Very Differently About Taxes When She Ran Her Own Business 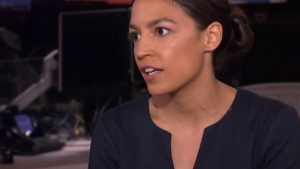 What?! An inconsistent socialist?! You don’t say.

Yeah, we all know that most socialists’ views on wealth and money totally change when it’s their money in question.

Bernie Sanders has famously been championing the cause of taxing the ever-loving heck out of the 1% while covertly enjoying his own status as a card-carrying member of the 1%. As far as we know, he’s never offered up 40% of his income.

So it’s not too shocking to learn that newly-minted socialist darling Alexandria Ocasio-Cortez, the “Democratic” Socialist Congressional candidate who the media has fallen head-over-heels for and who can’t even articulate what Democratic Socialism is, had a very different view on taxes when she was the one paying them.

Now that she is in the political spotlight, many of Ocasio-Cortez’s previous views are coming to light, particularly those surrounding raising taxes, since much of her platform revolves around taking more of people’s hard-earned money and giving it to those who did not earn it.

They cite a Daily Caller News Foundation report which explains:

Ocasio-Cortez appeared to have a different outlook on capitalism and taxes in 2012 when she was running a business of her own, Brook Avenue Press, an incorporated publishing firm for children’s books set in the Bronx. As a business owner, she came out in support of a bill that would provide tax deductions for business start-up costs, arguing that taxes directly impacted her business profits.

In a 2012 news article, Ocasio-Cortez complained “You don’t really make a profit in your first year,” later adding that getting taxed was “a real whammy.”

She also used to tweet out articles and quotes from entrepreneur and venture capitalist Paul Graham:

"Don't try to construct the future like a building, because your current blueprint is almost certainly mistaken." http://t.co/llgw7arC

Classic piece by Paul Graham, founder of Y Combinator: Why to Not Not Start a Startup http://t.co/LfvYzH4

“Now, with a $174,000 salary in her sights,” the Daily Wire concludes, “Ocasio-Cortez is championing views that conflict with that entrepreneurial spirit she formerly promoted mainly centered around the government providing for its citizens.”

It should be noted that Ocasio-Cortez would have been 21 at the time of these tweets, and she’s only 28 now. Who doesn’t oscillate between capitalism and socialism in their 20s, anyway?