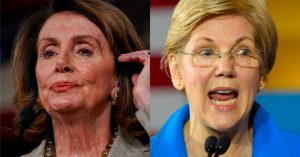 The Democrats will never be happy.

It was only a year and a half ago that they openly called for Sessions to resign because he was once in the same room–at the same time!–as a Russian diplomat and they were currently fully convinced Trump was a super secret Russian double-agent.

W the news broke in March of 2017 that Sessions, as a Senator, had attended an event organized by Obama that was also attended by Russian ambassadors, Pelosi released this statement, according to Conservative Tribune.

“Sessions is not fit to serve as the top law enforcement officer of our country and must resign. There must be an independent, bipartisan, outside commission to investigate the Trump political, personal and financial connections to the Russians.”

And she followed up her outrage with some tweets:

We are far past recusal. Jeff #Sessions lied under oath. Anything less than resignation or removal from office is unacceptable.

After lying under oath, there can be no doubt AG #Sessions is unfit to run the Department of Justice.

So, fast-forward to this week, and Nancy sure has changed her tune! Here’s what she tweeted about the news that Trump had forced Sessions’ resignation:

It is impossible to read Attorney General Sessions’ firing as anything other than another blatant attempt by @realDonaldTrump to undermine & end Special Counsel Mueller’s investigation.

Elizabeth Warren made the same transformation. In 2017, she was quite convinced Sessions needed to go:

And we need Attorney General Jeff Sessions – who should have never been confirmed in the first place – to resign. We need it now.

And now that she’s gotten what she wanted?

.@realDonaldTrump’s firing of Jeff Sessions brings us one step closer to a constitutional crisis. Congress must act to ensure that Special Counsel Mueller can do his job without interference.

So…in 2017 she called for a resignation that would have led to a constitutional crisis?