FLASHBACK: When Bill Clinton Ordered Airstrikes Over Iraq During Impeachment, Questioning Him Was “Treasonous” 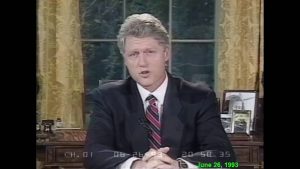 You know what’s fun? Comparing Clinton and Obama era Democrats to Bush and Trump era Democrats. It’s wildly hilarious to compare how these folks act when one of their own party is in the White House compared to the 24-hour hissy fit they seem gripped by when a Republican has the hot seat. Especially if you turn it into a drinking game.

Take, for example, the recent hysteria when Trump’s impeachment was referred to as a partisan “lynching.” Because, you know, that totally makes him racist. Except, of course, that virtually every Democrat, including then-Senator Joe Biden, called Bill Clinton’s impeachment the exact same thing.

Now, with the killing of Iranian terrorist Qasem Soleimani dominating everyone’s attention, liberal media pundits are consulting star signs and tea leaves over Trump’s possible ulterior motives for making such a move in the middle of impeachment, something the party called “treasonous” when Clinton did it back in the ’90s.

On the Sunday Today, NBC’s Harry Smith joked that “no one’s talked about impeachment, what, for two or three days now?” The New York Times wondered if Trump was trying to “wag the dog” to distract everyone from impeachment proceedings.

According to NewsBusters, that would have been fightin’ words for Democrats under ol’ Bill.

Just over 21 years ago, when Bill Clinton ordered airstrikes over Iraq while he was being, journalists responded quite differently, lamenting America’s “cynical” age and how readily folks engaged in “treasonous” questioning of a sitting president’s military power.

On the December 17, 1998 edition of the NBC Nightly News, Gwen Ifill pondered, “With the nation at war, the question is whether it’s even appropriate to act [on impeachment] now.”

The same day, World News Tonight anchor Peter Jennings whined that “there was not the traditional rally around the leader support that usually results while American forces are in action overseas.”

Even Brian Williams, who still had a bit of credibility before he was outed for being an absolute liar, complained on MSNBC’s The News, saying: “Is it the height of cynicism in the ’90s that we are discussing this at all? That anyone doubts the purity of a President’s moment when committing troops in action militarily?”

“One of the most disturbing and deeply cynical days in American political memory when you have the head of the Senate saying he does not support the air strike because he doesn’t believe in the motive or the timing,” Williams said in another segment of the show.

Remember Geraldo? That dude and his epic mustache had an absolute tantrum on the December 16 and 17 editions of Upfront Tonight, declaring that “those kinds of criticisms of the Commander-in-Chief” should be considered “treason.”

“As salvo after salvo of cruise missiles continue to punish Iraq, Republicans in Congress are engaging in conduct that during the war in Vietnam they called giving aid and comfort to the enemy,” he said on December 17th.

Get a load of these liberal warhawks! On second thought, better not turn this one into a drinking game unless you want to end up in the ER.