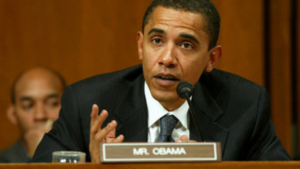 No, I haven’t discovered any more grey hairs, and yes, I do know how to use a smartphone, thank you very much.

The reason I’m feeling old is that apparently, I’m one of the few people in America who remembers when Democrats were opposed to illegal immigration. You know, the way most politicians are opposed to murder, or organized crime, or allowing your nation to be invaded by an army of people carrying the flag of their home country.

Democrats now oppose literally none of these things.

And it wasn’t so long ago that the patron saint of the post-millennial DNC, Barak Obama, was making speeches that sounded an awful lot like Donald “Literally Hitler” Trump.

Let’s play a little game, can you tell me who made this speech? Trump, or Obama?

We all agree on the need to better secure the border, and to punish employers who choose to hire illegal immigrants. We are a generous and welcoming people here in the United States but those who enter the country illegally and those who employ them disrespect the rule of law and they are showing disregard for those following the law. We simply cannot allow people to pour into the United States undetected, undocumented, unchecked and circumventing the line of people who are waiting patiently, diligently and lawfully to become immigrants in this country.

Trump trolled Obama beautifully on Twitter this week by flashing back to this speech and reminding the world of a simpler time when radical left-wing Democrats still believed in, you know, borders and laws.

In 2006, Obama echoed the same sentiment on the Senate floor:

The American people are a welcoming and generous people. But those who enter our country illegally, and those who employ them, disrespect the rule of law. And because we live in an age where terrorists are challenging our borders, we simply cannot allow people to pour into the United States undetected, undocumented, and unchecked. Americans are right to demand better border security and better enforcement of the immigration laws.

In 2014, as POTUS, Obama still sounded a lot like POTUS Trump, circa today, but you could see hints of the DNC rhetoric towards immigration that was to come (he still didn’t go as far as a Pelosi-esque appeal to the humanity of murderous MS-13 members)

Even as we are a nation of immigrants, we’re also a nation of laws. Undocumented workers broke our immigration laws, and I believe that they must be held accountable -– especially those who may be dangerous. That’s why, over the past six years, deportations of criminals are up 80 percent. And that’s why we’re going to keep focusing enforcement resources on actual threats to our security. Felons, not families. Criminals, not children. Gang members, not a mom who’s working hard to provide for her kids. We’ll prioritize, just like law enforcement does every day.

2014 is the year Obama adopted DAPA, the Deferred Action for Parents of Americans and Lawful Permanent Residents, which the Daily Wire explains “planned to allow as many as five million illegal immigrants who were the parents of citizens or of lawful permanent residents to apply for a program that would exempt them from deportation.”

The rest is a slippery slope towards calling for our borders to be thrown wide open and ICE to be abolished.

Well done, DNC. You’ve managed to destroy the one platform that might have helped you retain the voters that jumped ship to Trump in 2016.