FL. Sen. Scott Says The ‘Best Asset’ Republicans Have For 2022 Is Joe Biden 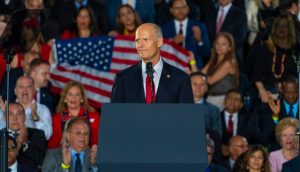 Sen. Rick Scott from the state of Florida said that the current opposition to President Joe Biden, which is growing with each passing day, is what will motivate voters to come out in 2022, according to a report from Politico.

“He’s our best asset right now,” said the Florida senator, who also serves as the chairman of the National Republican Senatorial Committee (NRSC). “I don’t believe he’s going to get any better.”

During a statement released on Monday on its website, the NRSC said, “Joe Biden’s approval rating continues to plummet as voters sour on his radical agenda. Biden’s approval rating in FiveThirtyEight’s average of polls reached a new low. 50.6% of voters disapprove of Biden while only 43.5% approve. That’s a 17.1% negative swing in 3 months.”

“Joe Biden worked hard to get his approval rating this low. He created a border crisis and continues to ignore it. Americans are still stranded in Afghanistan after Biden’s botched withdrawal. Americans are paying more for gas and other important everyday consumer products. And the list goes on,” the statement continued.

Meanwhile, Scott and NRSC consultants went over an internal poll of 1,200 suburban voters for reporters Monday.

It revealed Republican talking points on critical race theory, inflation, and Afghanistan were resonating with voters in key battleground states.

The poll, which did not include voters from solid blue states, also showed Biden’s approval rating underwater and revealed a majority of voters say the nation is on the “wrong track.”

An NRSC pollster said what is happening in schools, including the response to the pandemic, has turned off many voters.

Politico pointed out that former President Donald Trump has given an endorsement to a few candidates for Senate that face uphill battles in the midterm elections. Scott, however, maintained that endorsements really aren’t that important.