FL. Gov. DeSantis Makes Promise To Defend Parents During School Board Meetings Against The DOJ 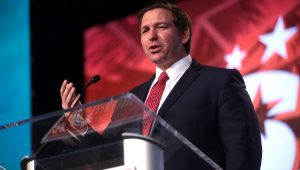 Florida Governor Ron DeSantis has promised parents that he would defend them after the Justice Department announced Monday that they would be directing the FBI to mobilize against parents who speak out at school boards, citing “threats of violence” and “efforts to intimidate.”

DeSantis posted up a Tweet on Tuesday saying, “Attorney General Garland is weaponizing the DOJ by using the FBI to pursue concerned parents and silence them through intimidation. Florida will defend the free speech rights of its citizens and will not allow federal agents to squelch dissent.”

According to Townhall, DeSantis’ office later released a statement saying that Florida law already prohibits harassment and that state law enforcement is “perfectly capable of responding to crimes in Florida, and we have never heard the FBI suggest otherwise.”

“However, disagreement is not harassment. Protest is not terrorism, unless it involves rioting, looting, and assault, like some of the left-wing protests of summer 2020. Again, all of those actions are crimes in Florida and will be prosecuted, regardless of political context,” the statement went on to say.

Seems pretty obvious that the radical left in the federal government is trying their best to silence those who are opposed to vaccine mandates and critical race theory from speaking their minds and exercising authority over what kids are being taught in school.

They want total control over our children, all to fill their heads with Marx and his twisted vision for society.