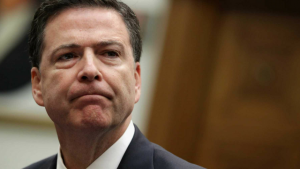 So, over the last few months, we’ve been drowning in all things related to FBI corruption during the 2016 election and the endless Mueller investigation.

It seems like the evidence continues to mount against the Obama administration, Hillary Clinton and her blasted emails, and an FBI we now understand to be clearly biased and unethical in their treatment of said blasted emails vs. the ever-elusive Trump-Russia collusion.

On Thursday, the Department of Justice finally released the Inspector General’s 500-page report on the FBI conduct during the Clinton email investigation and the 2016 election, and it doesn’t look great for Clinton and Comey, et al.

Courtney Kirchoff of Louder With Crowder, to spare us a perusal of the 500-page report of which she says “wading through it is like being Luke Skywalker in the garbage chute. Garbage everywhere, and it’s about to get worse,” broke down five major points to take away:

According to the Daily Caller, page XII of the report says the IG “identified numerous FBI employees, at all levels of the organization and with no official reason to be in contact with the media, who were nevertheless in frequent contact with reporters.”

Yeah…this is pretty awkward. As we will see, there was clear anti-Trump bias in the agency, so evidence of such a cozy relationship with an equally anti-Trump media isn’t exactly shocking, but it sure is damning.

This is no bueno for Hillary. No bueno at all. From page 89 of the report:

“FBI analysts and Prosecutor 2 told us that Former President Barak Obama was one of the 12 individuals with whom Clinton had direct contact using her clintonemail.com account. Obama, like other high level government officials, used a pseudonym for his username on his official government email account.”

Do you mean to tell me Clinton wasn’t using her private account to discuss yoga and her grandchildren after all? Who woulda thunk it. Try not to get your eyes stuck in the back of your head as you roll them.

3. FBI Agents/adulterous lovers Peter Strzok and Lisa Page’s text exchanges show not only a clear bias against candidate Trump but a willingness to actually stop the election. Yeah.

Strzok and Page, who appeared to be texting during the Democratic National Convention, expressed a concern that there was a chance Trump might win, as well as a concern of the “anarchist Assanges” in reference to Wikileak’s Julian Assange, “who will take Fed information and disclose it to disrupt. We’ve gotta get the memo and brief and case filing done.”

Later, Page would tell her lover Strzok that he may have been “meant to be where you are so you can stop this” in reference to Trump’s potential election, to which he, clearly flattered, responded affirmatively, saying that he could “protect the country at many levels, not sure if that helps.”

4. Page, Strzok, McCabe, and other FBI agents clearly conducted interviews with Clinton differenly because they hoped she would win the election:

On page 402 of the report, the IG says that they did not find evidence of improper considerations of bias in the timing or scope of the Clinton interview, but that they had three primary concerns in the way the interviews were conducted nonetheless:

Yeah, that does not look good.

From the report (emphasis added):

s we describe in Chapter Nine of our report, the explanations we were given for the FBI’s failure to take immediate action on the Weiner laptop fell into four general categories:

The FBI Midyear team was waiting for additional information about the contents of the laptop from NYO, which was not provided until late October;

The FBI Midyear team could not review the emails without additional legal authority, such as consent or a new search warrant;

The FBI Midyear team and senior FBI officials did not believe that the information on the laptop was likely to be significant; and

Key members of the FBI Midyear team had been reassigned to the investigation of Russian interference in the U.S. election, which was a higher priority.

We found these explanations to be unpersuasive justifications for not acting sooner, given the FBI leadership’s conclusion about the importance of the information and that the FBI Midyear team had sufficient information to take action in early October and knew at that time that it would need a new search warrant to review any Clinton-Abedin emails. Moreover, given the FBI’s extensive resources, the fact that Strzok and several other FBI members of the Midyear team had been assigned to the Russia investigation, which was extremely active during this September and October time period, was not an excuse for failing to take any action during this time period on the Weiner laptop.

“Look, this report is 500 pages long. It’s damning. It’s explosive. But what it shows us is even government agencies which should be non-bias and apolitical are extremely bias and political, and use their power to target their political enemies,” Kirchoff rightly observes.

“Be skeptical. Be vigilant. Don’t just trust the FBI because they’re the FBI.”