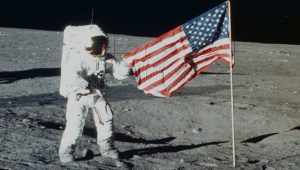 The Neil Armstrong biopic “First Man” starring Ryan Gosling did not have a really great weekend at the box office this week, thanks in large part to a controversy that was stirred up after it was revealed there would be no scene depicting the planting of the flag on the moon, which was a pivotal moment in our nation’s history.

“The visceral historical drama got grounded in its domestic debut with $16.5 million, despite positive reviews,” The Hollywood Reporter reports. Internationally, “First Man” performed even worse, earning just $8.6 million in 22 markets. With a production price tag of $70 million plus another $50 to $100 million in marketing costs, the film could be a major loss for Universal Pictures.

Despite the poor numbers, Universal has expressed confidence the film will perform well over time after getting major boosts this coming awards season, during which it is expected to be nominated for various top prizes.

In fairness to Orr, his projection that “First Man” could pull in big numbers over time is not without precedent. Both “Bridge of Spies” and “Argo” debuted to dismal box office receipts but went on to gross well past the $150 million mark during awards season. The big BUT to that, however, is that none of those films were dogged by the same controversy “First Man” stepped into the moment its star Ryan Gosling said the American flag planting was intentionally omitted.

“I think this was widely regarded in the end as a human achievement [and] that’s how we chose to view it,” Gosling said of the decision.

Not long after it was revealed this scene was not going to be shown in the film, Buzz Aldrin, who became the second man to walk on the moon, throughly trashed the movie.

Given the fact this was such an important piece of our history, it’s not right to completely leave it out, just for the sake of looking progressive. This was a poor creative choice on behalf of the director and producer who should have known better.