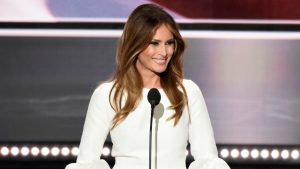 First Lady Melania Trump has decided to cancel her plans to join up with husband President Donald Trump on the campaign trail due to a lingering cough from her battle with the coronavirus.

The first lady was due to appear at a rally in Erie, Pennsylvania on Tuesday, which would’ve been her first appearance at a rally in over a year, but unfortunately, that will have to wait until she feels better, according to her chief of staff Stephanie Grisham.

Grisham said the decision for her not to attend the rally was made out of an abundance of caution given her recent coronavirus diagnosis. This would have been her first public appearance since being stricken with the virus along with her husband in early October.

The Trumps were both sidelined for a week in October, when their family, including teenage son Barron Trump, all contracted the virus, though it remains unclear where they got it.

In the same statement, the first lady had revealed that her son, Barron, had also tested positive for COVID-19, but had since tested negative.

Here’s to a speedy recover for the first lady so we can all be graced with her lovely presence at future rallies ahead of the November election.