First Female Mayor Of Afghanistan Says Taliban Is Coming ‘For People Like Me,’ Will ‘Kill Me’ 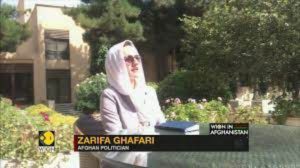 The first female mayor in Afghanistan says she’s currently waiting for the terrorists in the Taliban to come and take her life after the organization managed to oust the government on Sunday and take over the entire country.

Zarifa Ghafari, 27, is not only the first female mayor in the country of Afghanistan, but is also the youngest, having taken office back in 2018. Ghafari revealed that she has received numerous death threats from the Taliban and has had multiple assassination attempts on her life.

Ghafari’s father, Afghan General Abdul Wasi Ghafari, was killed just last year. Zarifa held a defense ministry post in Kabul, having moved there due to fear for her personal safety, until the Taliban showed up and overran the place this weekend.

“I’m sitting here waiting for them to come. There is no one to help me or my family. I’m just sitting with them and my husband. And they will come for people like me and kill me. I can’t leave my family. And anyway, where would I go?” she went on to tell iNews.

Less than a month ago Ghafari has seemed optimistic about her country’s future, telling iNews at the time: “Younger people are aware of what’s happening. They have social media. They communicate. I think they will continue fighting for progress and our rights. I think there is a future for this country.”

Refugees who fled to Kabul before its fall said that Taliban militants had already begun cracking down on Afghans in outlying cities and towns, forcing unmarried women to wed Taliban fighters and executing Afghan soldiers. Members of the Taliban have reportedly already started “door to door” searches of Kabul looking for any former officials of the Afghan government, soldiers, journalists, and others.

This is what happens when radicals take over a country and demand that everyone do everything their way or else suffer death. Friends, that is what true oppression looks like. And that is precisely what’s coming down on all of the people in Afghanistan.

And who is to blame for this debacle?

President Joe Biden, who thought it would be a grand idea to remove troops from the country during the summer, when the Taliban is usually at their strongest. Poor decision making seems to be the tag line for the whole Biden administration.