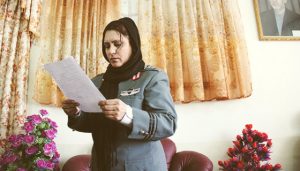 While terrorists within the Taliban organization start to settle into their new roles of power in the country of Afghanistan after being ousted for 20 years, one of their very likely targets is no doubt going to be the first woman to ever serve as a police chief in the nation.

It’s been almost seven years since Col. Jamila Bayaz was first appointed to be the chief of police in Kabul’s District One, according to sources from Newsmax, but it’s likely that she’s soon to be stripped of her rank, her uniform, and her gun by the Taliban government.

Dear liberals. This is what REAL oppression looks like.

Bayaz, 50, spent 32 years as an investigator and counter-narcotics agent before her promotion in 2014 to be “top cop” of one in ten districts in the capital city. Her district, according to Global News, “houses the presidential palace, numerous ministries, the central bank, and the main money and gold markets.”

The focus on Bayaz and her uncertain future comes as the Taliban, having initially promised to respect women after twenty years of their attaining greater standing in society, now appears to be returning to its old policy of oppressing women that typified its years in power from 1996-2001.

In those years, the Taliban forced women to cover their faces, banned them from working or attending school, or even leaving their homes without being accompanied by a male relative.

And the Taliban is wasting no time ensuring that women are once again discriminated against and treated as second-class citizens, as they announced on Friday that women would now be banned from reporting the news on local television stations.

At the time that Bayaz became the chief of police, back in 2014, she investigated a number of cases in which high-profile, prominent women had been attacked. A couple of these cases happened to include several of her fellow police officers who were killed in the southern part of Afghanistan, and an Indian author who lived in East Pakistan who was murdered after penning a book about what life was like under the rule of the Taliban.

This work was later turned into a hit Bollywood movie.