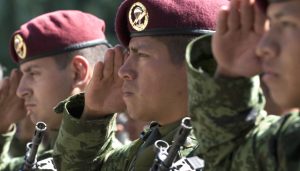 Mexican Secretary of Defense Luis Sandoval announced on Monday that the country would be deploying a stunning 15,000 troops to the border they share with the U.S. as a means of stopping illegal immigration into our nation.

This action seems to be the direct result of the pressure applied on Mexico by Trump when he threatened tariffs on the country if they didn’t do something to help us deal with the insanely large number of folks flooding across the border.

According to CNN, Sandoval said the following today in Cancun: “In the northern part of the country, we have deployed a total of almost 15,000 troops composed of National Guard elements and military units.”

Valencia added: “I have never seen this kind of cooperation from Mexico before in terms of immigration.”

I have never seen this kind of cooperation from Mexico before in terms of immigration.

Trump announced at the end of last month that Mexico would face tariffs that would devastate their economy if they did not step up to the table and make serious efforts to help stop the problem.

Trump tweeted: “On June 10th, the United States will impose a 5% Tariff on all goods coming into our Country from Mexico, until such time as illegal migrants coming through Mexico, and into our Country, STOP. The Tariff will gradually increase until the Illegal Immigration problem is remedied, at which time the Tariffs will be removed. Details from the White House to follow.”

The tariffs were set to increase by five percent every month, capping off at 25 percent until Mexico did something to address the issue.

On June 7, the president announced that we had reached some sort of deal with Mexico to take care of this problem.

Say what you will about President Trump, but this man definitely knows how to get things done. The responsibility to protect our borders isn’t ours alone. Mexico has a role to play as well, and it’s about time they did something to contribute to the effort.

If they aren’t going to pay for the wall, the least they could do is help curb the current influx of individuals across the border.