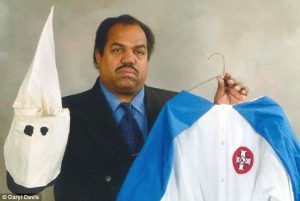 Hurricane Harvey has proven to be a disaster of epic proportions. Survivors will divide their lives into what happened pre-Harvey and what happened post-Harvey. Many will not feel like solid ground is beneath their feet for years to come. However, something good can come from the worst situations, including Hurricane Harvey.

Amid the devastation of 130mph winds, floods reaching an 800-year high-water mark, and looters, we’ve seen pictures of people helping each other – white people, black people, Hispanic people, people here illegally. Hurricane Harvey has done what almost no one else has been able to do. He showed us that all the things separating us are bull(manure). None of that matters when an entire community is fighting to save their property, their homes, and their lives.

Harvey has taught us is it’s hard to hate someone when we know their fears and their struggles. Daryl Davis has known this truth since 1968 when, as the only black Cub Scout in the pack, he carried the American flag in a Belmont, Massachusetts parade. Ten-year-old Davis had no idea the rocks and bottles landing all around were meant for him until pack leaders and other members formed a protective wall around him.

Since he had attended international schools while his father worked  in the Foreign Service, racism was not something Davis had experienced until the family moved back to the U.S. When he asked his parents about what had happened, he couldn’t understand how people could attack him because of his skin color. That’s when, according to Davis, he first asked the question, “How can you hate me if you don’t even know me?” That question would set the course of his life.

After receiving a music degree from Howard University, Davis began his career as a blues musician. One of his early gigs, however, was with a country band. He was the only black member and usually the only black person in the bars and lounges where they played. One night in 1983, when he was 25, a man approached him after the set and commented on his musical style.

During their conversation, the man told Davis that he had never shared a drink with a black man before. When Davis asked why, the man told him he was a member of the Ku Klux Klan. Davis laughed. He didn’t believe it until the man pulled out his KKK card.

Their shared taste in music – the man had told Davis he’d never heard a black man play the piano like Jerry Lee Lewis – overcame their differences, and the man told him to get in touch next time Davis played at the bar. He did, and the two men formed an unlikely friendship. Eventually, because of that relationship, the man left the Klan. That flipped a switch in Davis’s brain, and he became a man on a mission.

Since then, Davis has spent every minute he’s not playing music befriending white supremacists. He’s been threatened, sued, and physically attacked, but he’s never wavered in his determination to fight racism. Klan members who have left the organization after becoming friends with Davis include two Grand Giants, a Grand Klaliff, and an Imperial Wizard.

Davis estimates at least fifty members have left the Klan after spending time with him. Add to that the number of Klansmen they might have recruited, and it appears Daryl Davis has done much to combat racism in America. And yet, some of his biggest critics are other black Americans.

Many claim that by developing relationships with white supremacists and eating at their tables, Davis has set black Americans’ civil rights gains back at least two decades. Davis, who collects the robes of his friends who have left the Klan, responds by asking those critics how many robes they’ve collected. The only answer he’s ever received is, “None.”

Many of those who criticize Davis are pastors. They seem to have forgotten the scriptures. Matthew 9:10-12 says, “

While his critics protest, riot, burn down neighborhoods, and execute cops, Daryl Davis practices love as modeled by Jesus. And, he has results to validate his approach. Those who decry his methods have resentment, conflict, and strife to show for their efforts.

This nation and this world need more people like Daryl Davis, who don’t need a tragedy to show them that we’re all human, and we all have the same wants and needs. What kind of world would we live in if BLM started using Daryl Davis’s methods? We’ll never know for sure, but I’ll be it would be a better one.