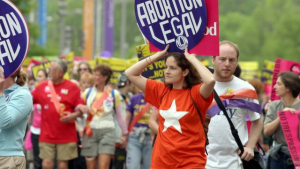 If more feminists believed in sex strikes, they never would have “needed” Roe v. Wade in the first place, now would they?

You read that right, by the way–yes, feminists have proposed a “sex strike” to try to save Roe v. Wade once the Supreme Court is occupied with yet another originalist who (one can hope) would strike down the awful abortion decision of 1973.

Before you say, “hey, problem solved!” here’s the kicker: they’re only refusing to have sex with people who don’t support “a woman’s right to choose.”

We’re not really sure how many feminists were sleeping with pro-life men in the first place, so this will most likely accomplish literally nothing…other than to help a few guys out there dodge some serious bullets.

Spooked by the Supreme Court vacancy of Justice Anthony Kennedy, Harper’s Bazaar political editor-at-large Jennifer Wright called for a sex strike from fellow pro-abortion gals to save landmark abortion case Roe v. Wade. Wright instructed her pro-abortion allies to withhold sex and dating “with anyone who doesn’t support a woman’s right to choose.”

The women were told to signal their solidary by posting a female judge emoji in their “dating profiles” and using the hashtag #Lysistrata, in reference to the Greek play wherein women withhold sex in a crusade to end the Peloponnesian War.

“We’re very likely to lose Roe Vs. Wade. Some men may think that doesn’t concern them. Make it,” posted Wright, adding, “If you’re single and dating, add a [female judge] emoji to your dating profiles to show people you won’t date/sleep with anyone who doesn’t support a woman’s right to choose.”

It would be cute that these women think anyone cares who they’re not sleeping with if it wasn’t so depressing that a) sex has gotten to be so casual they think it will make an effective political statement to actually withhold it and b) this is what makes them feel empowered, not the fact that women have come so far in this country that not only are there have already been four women serving on the Court and Trump is considering nominating a fifth.

I know it’s not exactly an original statement to say that modern feminism has gotten it entirely wrong, but I can’t stop marveling at just how wrong it is.