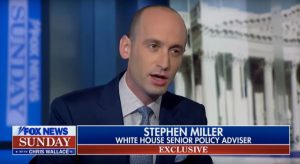 Gee, Osberg’s a real chip off the old block, isn’t she? Such a nice girl. They just don’t make ’em like her anymore, do they?

This is pretty sick and twisted, but given the state of the progressive movement, it’s actually on message with what they’ve been preaching for a long time now. If you dare hold a worldview that is different from theirs, you deserve to die. Sounds like one heck of an oppressive religion, no?

In a Friday post to the “Barf Bag,” which is “a daily politics roundup to help you sort through the chaotic Trumpian news cycle,” writer Molly Osberg discussed Katie Miller, Stephen Miller’s wife and Vice President Mike Pence’s press secretary, testing positive for the coronavirus.

“And while I am generally loathe to wish physical harm on those I disagree with, and while I do wish Katie a speedy recovery, I’m comfortable shedding whatever objectivity I have here to say I desperately hope Stephen Miller contracts covid-19,” Osberg wrote in a post titled “I Will Personally Be Thrilled If Stephen Miller Dies of Covid-19.”

“This is the man who has spent his entire life pursuing the idea that America’s diversity is a disease; who laundered white nationalist talking points first through right-wing blogs and then wrote them into the now-President’s campaign speeches; who has been ‘obsessed’ with the idea of ‘consequences’ for immigrants; who ‘actually enjoys seeing those pictures at the border.’”

Osberg continued on saying, “This is the person who relentlessly hammered the idea that the only punishment of consequence was to treat children as poorly as the law could possibly allow.”

“If thousands of Americans, the vast majority of them black and Latinx, are going to die every day from the new coronavirus, Stephen Miller should absolutely get it too.”

Sen. Ted Cruz offered a little bit of sanity to this wackiness by calling Osberg out for her hateful rhetoric, noting it as “sick and twisted,” which are very apt descriptions of her take Miller’s demise.

This is sick and twisted. Political disagreements are fine, but—especially in a time of crisis—we need more love in the world and less hate. #OneAmerica https://t.co/XodXR0bURV

You really have to be an unhinged person to think saying something like this is in any way acceptable. No one should wish death on someone simply over a matter of political difference. It’s insane to do something like that. Truly insane.

What in the world has made these people forget their humanity to such a level that they be perfectly okay with seeing fellow travelers along the journey of life die because they didn’t see the world through the same lens they do?

Pray for these folks.