Pedro Pascal is The Mandalorian in the Disney+ series THE MANDALORIAN.

It’s nothing new for feminists and intersectional watchdogs to denounce virtually every entertainment offering that doesn’t meet their stringent standards for increasingly meaningless “inclusivity.”

It’s a rare thing, however, for one of them to faceplant quite so thoroughly, epically, and hilariously as career feminist Anita Sarkeesian.

In a tweet that was ratioed into oblivion last week, the Feminist Frequency head and anti-GamerGate pundit complained that Disney+ hit show The Mandalorian didn’t have a single female character with lines in its entire first episode.

“Am I extremely tired or is there not a single female speaking character in the first episode of #Mandelorian??[sic] I’ve gotta have missed something right???” Sarkeesian tweeted.

Am I extremely tired or is there not a single female speaking character in the first episode of #Mandelorian?? I've gotta have missed something right??? pic.twitter.com/nSo7sv4CUr

Just like she misspelled the name of the show whose title was literally right there in her tweet attachment, Sarkeesian also missed that The Armorer, who appears to be the highest-ranking Mandalorian in the episode she just watched, was a woman played by Emily Swallow.

I’d like to theorize that Sarkeesian’s apparent disregard for The Armorer is indicative of modern feminism’s disdain for the humble woman who leads a simple life. Being a wife, mother, and homemaker is the lowest calling to these people, so, naturally, any woman that isn’t front-and-center and kicking ass a la Captain Marvel is feeding the patriarchy simply by not being awesome enough. But, I digress.

Apparently convinced that she was right and hadn’t simply missed the obvious, Sarkeesian continued to rail against Jon Favreau, the show’s creator. “I guess Jon Favreau was like ‘well if we just make all the vehicles female like the ship and the Blurrg then we’re good right? That’s just the right amount of ‘female’…It feels especially jarring given how much the recent films have done to amplify women and women of colour who have been historically marginalized in the franchise.”

Gotcha, the franchise that saw women at the forefront and behind the scenes of a rebellion against an evil intergalactic empire has historically marginalized women. Right.

“I still feel like I just forgot an entire scene and that in this year of our Lord 2019 an epic blockbuster television show could not be released without any female speaking parts,” Sarkeesian continued, completely unaware that she did in fact forget an entire scene.

I still feel like I just forgot an entire scene and that in this year of our Lord 2019 an epic blockbuster television show could not be released without any female speaking parts.

The People of Twitter™ were ready and willing to raze the incoherent rant to the ground, but like the show’s lovable Kuill, Sarkeesian had spoken. While she conceded that the Armorer was in fact a woman (although we have no idea how The Armorer identifies or what their preferred pronouns are so we really can’t be sure) Sarkeesian responded with a defiant “STILL.”

Shout out to @jaydedaustin for reminding me of the one scene that had a female character. Lol. Sigh. STILL. https://t.co/7l5BHU52PY

According to The Daily Wire, The Mandalorian’s cast and crew is a veritable powerhouse of Hollywood women, including Gina Carano, Agents Of S.H.I.E.L.D. star Ming Na-Wen, and Bryce Dallas Howard. The series’ third episode was also directed by Deborah Chow, making it the first live-action Star Wars property directed by a woman.

I may not be a smart person, but I was able to find all of this information on Google (with a hat tip to The Daily Wire’s Emily Zanotti) without issue in order to express an informed opinion. But, according to Sarkeesian, that’s an unrealistic burden to meet.

According to Bounding into Comics, Sarkeesian doubled down in epic fashion by blaming her original tweet’s backlash on—you guessed it—the patriarchy.

“Wow. Nearly 3000 replies because one woman voices her opinion that we shouldn’t be at a point anymore where we just accept media that normalizes patriarchy. Cool cool cool. Everyone’s having a normal one I see,” she tweeted.

Wow. Nearly 3000 replies because one woman voices her opinion that we shouldn’t be at a point anymore where we just accept media that normalizes patriarchy. Cool cool cool. Everyone’s having a normal one I see. pic.twitter.com/N8vMHJZ09e

“Most mass media overwhelmingly centers men, and perpetuates patriarchy. The #Mandalorian is no exception,” she continued, figuring out how to spell ‘Mandalorian.’ “It wastes no time in establishing a patriarchal setting: the bartender is a man, the bar patrons are men, the cab driver is a man, etc. The first ‘female’ we meet is the ship.”

“[The show] may introduce a few significant female characters later on. Great. It doesn’t change the fact it perpetuates and normalizes patriarchy,” she continued, lamenting that “We all accept patriarchy in our mass media without batting an eye. When someone calls it out, we get upset. I wonder why.”

Sarkeesian proceeded to cry that the epic ratio treatment her tweets received were “online harassment” further indicating the dangers of patriarchy and just how much we need voices like hers to defend us against it.

tl;dr: online harassment isn't just threats, it's never being given the benefit of the doubt because you are a woman. It's never being able to make a typo or small mistake. It's having 3000 people actively try to silence you because you have an opinion about a beloved TV show.

So, rather than a simple, “aw man, my bad!” we get a revision of the facts and a reminder of the works-based salvation of intersectionality. Sounds about right. 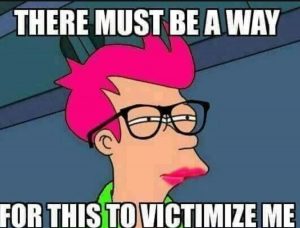