FEMINIST: Al Franken Should NOT Have to Resign 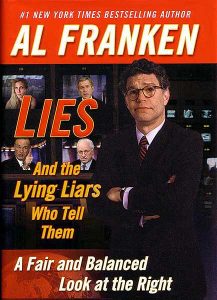 “If the short-term ‘right thing’ leads to long-term political catastrophe for American women, I think we need to reconsider our definition of the right thing. Don’t just apologize and drop out of sight. Do penance. Live the values you campaigned on. Be a selfless champion for women’s rights.”

Those are the words feminist author Kate Harding used in a Washington Post essay to explain why Sen. Al Franken (D-MN) should not be forced to resign for sexually harassing broadcaster Leeann Tweeden.

Harding’s essay was titled: I’m a feminist. I study rape culture. And I don’t want Al Franken to resign.

She did, however, go on to explain that if another allegation arises from another woman that they should oust him from his senate seat. Franken said that his actions toward Tweeden were meant to be funny. Like a joke that’s been told over and over I would imagine he’s tried to “be funny” with others. Hopefully they’ll come forward.

Harding said, “One more empty apology and resignation, one more head on a pike, will not make American women safer or better off. Powerful men lifting up women’s concerns and supporting progressive women candidates, however, could be a real step toward changing the culture that makes victims of so many of us.”

Personally I think “powerful men” such as Franken seem rather weak to most of America.

Hollywood as of late has been consistently leading the charge in its expressions of sexual abuse and harassment. Franken, who’s former career as a comedian and Saturday Night Live star, seems to be following suit with the trend of exposed improprieties committed against vulnerable people. Apparently everything is being explained away as an open secret and a seemingly cultural norm for the Hollywood elite and now it’s spilling over into Washington, DC.

The left is often quick to lump President Donald Trump into the same pile of perverts because of his hot mic incident with Billy Bush in 2005. One would be remiss if they don’t remember that “The Donald” was also a “character” created by Hollywood to be the billionaire playboy mogul that mirrored his real life iconic image. Character or not, his words were inappropriate and unacceptable. Be reminded, however, that they were just words and not actions and to date NO ONE has been able to substantiate a sexual harassment claim against the president. Compared to an actual  picture of Sen. Franken in the act of groping a woman I’d say there’s not much to debate.

It is interesting to me to see how the left is squirming to find ways to justify the actions of their compatriots when heretofore they’ve condemned the president at every turn. Remember the throngs of marching vagina hats? Where are the protests against the sexual harassers that participated in their last protest? When feminists justify sexual harassment and assault against women in order to maintain a political narrative the hypocrisy knows no bounds!

Meanwhile we will sit back and watch the accusers emerge one by one. Personally I think the hypocrisy will grow exponentially.