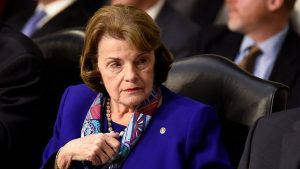 In the fallout of the Kavanaugh fiasco last month, there was one clear outcome. While the nation was staunchly divided on whether or not Kavanaugh was a victim or a villain, pretty much everyone was mad a Sen. Dianne Feinstein.

The ranking member of the Senate Judiciary Feinstein, as we all now well know, sat on a letter from Dr. Ford for months even after privately meeting with Kavanaugh and sitting through the majority of the confirmation process before dropping Ford’s allegations at the last moment, effectively stalling his final confirmation vote for two weeks.

Democrats and Republicans both chastized Feinstein for this seriously unethical move, but it appears she’s far from repentant of her pursuit of Kavanaugh’s reputation.

While most of us have, thankfully, finally moved on from the whole ordeal, she’s not done–she recently said that if Democrats win back the Senate, she’d call for him to be investigated all over again.

“I’d be in favor of opening an investigation into the allegations,” Feinstein, the ranking minority member of the Senate Judiciary Committee, said during a debate in San Francisco with her challenger, state Sen. Kevin de León. A fellow Democrat, de León emerged from California’s hectic jungle primary system to challenge one of the Senate’s longest tenured members for her seat.

Feinstein is clearly vying for support from far-left California voters, but tugging on this yarn is not likely to help Democrats nationally.

Senate Majority Leader Mitch McConnell said the fight over Brett Kavanaugh’s Supreme Court confirmation is giving GOP candidates a well-timed “adrenaline shot” for the rest of the midterm election campaign, but he’s taking nothing for granted.

Imagine that–women don’t like to see sexual assault trivialized as a political prop. Not to mention, no woman is an island, and mothers, sisters, daughters, and wives aren’t thrilled at the idea of the men they love being accused without a scrap of evidence because #MeToo says so.