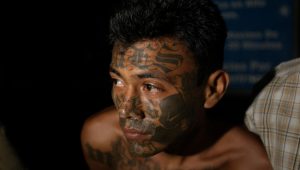 You’ll be hard pressed to find a more disgusting group of individuals than those who belong to the MS-13 gang, a group that President Trump has been working hard to dismantle and destroy over the last few years of his administration.

Federal law enforcement officials have now charged 11 members of this horrific gang in the brutal, gruesome assault and sex trafficking of a 13-year-old girl.

These miscreants need to be put down like a rabid dog.

Here’s more on this awful story from TheBlaze:

A 48-page FBI affidavit alleges that at least 11 individuals are involved in the vicious beating and sex trafficking of a young girl identified as “Minor 2.”

The 13-year-old girl was reportedly beaten with a baseball bat on at least two occasions between August and October 2018. Investigators said that the girl was struck at least 26 times in each incident.

The first incident was reportedly part of an “initiation” into the gang, and the second incident allegedly took place at an El Salvadoran individual’s request because the individual reportedly believed she was fraternizing with another gang.

The second minor in this incident wet herself from being beaten so severely. Doesn’t that just make your blood boil? It ought to. These are the same individuals Trump called “animals” and the media defended. Never forget that.

A medical examination of the second minor discovered blunt force trauma to her lower back, buttocks, and thighs. And as if these disgusting individuals hadn’t already done enough to this poor girl, they also sexually abused her and trafficked her out for over two years.

One communication obtained by investigators reportedly showed the girl in a state of undress with the message, “I will move the little young female over there with you. You can have her all week if you want. Just give me something under the table.”

The young girl, who had previously been reported missing, was recovered in Maryland in October 2018.

It was also discovered during a health examination that the girl tested positive for several sexually transmitted diseases.

The mainstream media wants us all to believe that by fighting against this group, by taking measures like building a wall, we’re anti-immigrant. Yes, that’s right, folks. The left defends these animals. And yes, they are animals.

Not immigrants. The members of MS-13. No human being could inflict this measure of torture and pain on another person and live with themselves. Something needs to be done to bring their reign of terror to an end.

And that means building a wall and increasing border security.