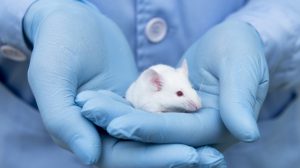 Small experimental mouse is on the laboratory researcher’s hand

A brand new report reveals that the federal government has spent nearly $2 million in taxpayer dollars on experiments where researchers took scalps from aborted children and sewed them on to mice and rats to conduct tests on human skin infection.

Have you read anything more disturbing than that lately? For your sake I hope the answer is “no.”

The “research” if this horrific garbage can be called that, was conducted at the University of Pittsburgh, and has generated a healthy dose of criticism, especially due to the procurement of fully intact skin from aborted babies.

And if all of that isn’t horrific enough, the scalps sewed on to the rodents actually sprouted human hair.

Records show that the National Institute of Allergy and Infectious Diseases funded that research to the tune of over $400,000. A full accounting of the project’s funding stream, however, shows taxpayer contributions totaling almost five times that amount.

A spokeswoman for the NIAID told Just the News this week that grants from both that agency and the National Institutes of Health’s Fogarty International Center add up to over $1.9 million.

The agency said that the NIH “is committed to ensuring that research involving human fetal tissue is conducted responsibly and meets the highest ethical standards.”

“NIH-funded research involving human fetal tissue must be conducted in compliance with all applicable federal, state, and local laws and regulations,” the statement went on, adding that “research involving the transplantation of human fetal tissue” must have “informed consent” from the mother of the aborted baby before the tissues can be obtained.

The NIAID was later asked whether or not it had provided funding for any other experiments involving the body parts of aborted children they did not provide an answer.

Think that probably says all that needs to be said.