Isn’t it reassuring to know that we Americans can sleep easy in our beds at night, secure in the knowledge that Congressional Democrats have their priorities in order and are working non-stop to keep us and our children safe from harm? Their ability to look through all the noise and clutter and focus with laser-like attention on what’s really important is as amazing as it is comforting. In these times of confusion and uncertainty, their dedication to duty is breathtaking.

How easy would it be to let foreign affairs get in the way of looking out for their constituents back home? Russian bombers flying along the Alaskan coast would cause lesser public servants to let their attention waver. Putin’s determination to re-build the Soviet Navy might cause some in Washington to blink, but not our agenda-driven heroines and heroes. Vlad’s incursion into Ukraine and the ruthless attacks he’s launched against that sovereign nation could have given our politicians pause, but The Agenda must be served.

China has deployed carrier-killing missiles with a longer range than our best naval aircraft possess. In addition, the Chinese navy is busy building their own aircraft carriers. Some say they’re as good as ours. They’ve also built artificial islands in the South China Sea. Of course, they’re just navigational aids, put in place to assist merchant and fishing vessels. Those weapons and military bases that were added must have been intended to ward off pirates.

Of course, we don’t need to worry about Beijing’s military prowess. They just have to call in our debt – all $1 trillion-plus of it to bring us to our knees. It’s hard to fight a war when you can’t afford to put gas in your airplanes. Weak lawmakers would have a hard time concentrating on anything else with a fire-breathing dragon crouched on our doorstep. Not our steadfast leftists, though. They know what their priorities have to be.

China might be the largest concern we face in Asia, but they aren’t the scariest. Kim Jong Un takes that prize. He isn’t very tall, and his country is kind of tiny, but that little man is crazy. Seriously, incurably insane. While his people starve, he’s trying to develop a delivery system that will deliver a nuclear warhead to the United States mainland. Apparently, he thinks that will make America bow to his demands and elevate his status among world leaders. Also, he’s probably counting on China to back him up. It’s easy to be brave when that fire-breathing dragon we talked about earlier is your backup plan. Maybe he’s right, and maybe he’s not. Either way, leaders with spines made from something less than forged steel would worry about what happens when a maniac with nuclear toys and a grouchy big brother has a temper tantrum. It’s a good thing our leftist lawmakers’ backbones were forged in China.

The Middle East is a concern for almost everyone. Two prolonged military campaigns, having ISIS called up from the minors to join the major league, the Muslim Brotherhood, the Sunni’s, the Shi’ites, Sharia Law, jihad… It’s enough to test the strongest person’s resolve. When Iran shocked the world by going back on their pinky-swear and maintaining a nuclear weapons program, anyone would have understood if the Dems wanted to put their agenda on the back-burner and deal with the threat. Not those stalwarts, however. Their purpose remains true, their resolve strong.

Our leftist friends love to talk about the homeless. They are determined to see boys showering in the girls’ locker room and peeing on the toilet seats in the women’s bathroom. They want single-payer healthcare, food stamps for all Americans, freedom from religion, and a free college education for every single child – even if those who can’t read and write. They tell us that all life on the planet will end by (insert some future date here if the world hasn’t ended by the time you read this) if every American doesn’t bow to the EPA and worship at the altar of climate change. Children go hungry in America while our cities are battlefields with blood running through their streets. 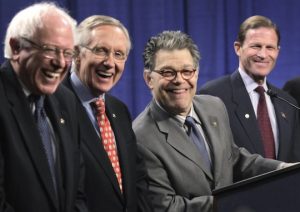 The American left soldiers on, holding our President accountable and protecting our collective interests. It would be easy for them to throw their hands up in despair and try to tackle some of these minor problems. It would be understandable to any thinking person if they did, and even commendable to some. Not these intrepid ideologues, however. They’re demanding that Ivanka Trump’s security clearance be reviewed. They’re ensuring the nation expresses appropriate outrage that the President didn’t conduct diplomacy according to their approved script. They’re guarding the democratic process by making sure that no healthcare bill is passed without the appropriate debate and discussion in each chamber of Congress.

Thank you, Democrats, for your courage, your stamina, and your commitment to keeping America safe. You inspire us.

How Americans Are Being Deceived By “School Choice” (Video)
January 26th, 2022 Sons of Liberty Media